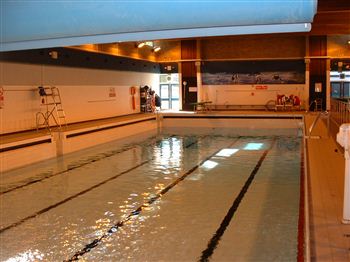 HUNDREDS of pounds of taxpayers’ money was literally poured down the drain when cheeky vandals drained a Highland swimming pool.

Furious staff arrived after the midnight prank to discover 45,000 gallons of water had disappeared from Forres Swimming Pool, near Inverness.

Swimmers were left high and dry as it took 48 hours to refill, heat up and chlorinate the three-metre-deep pool.

It took just 30 minutes for the pair to pull the plug on £1,000 of water, forcing leisure centre staff to turn away swimmers for the next two days.

Moray Council swimming pools manager Ken Brown said it was “sheer luck” that a pool supervisor showed up to work early and plugged the pool before it had emptied completely.

“It was just sheer luck that it was not another day.

“This was not a prank, but a malicious act which could have had disastrous consequences if the culprits had interfered with other valves.

“They managed to get in and turned some of the valves to drain the water, but if they had tampered with other valves, then pipes could have burst, water would have spilled out everywhere.”

CCTV footage has been given to detectives, allegedly showing the culprits breaking into a pump room.

Veronica Tomlinson, who was among those who turned up on Wednesday morning to use the pool as normal, didn’t even get to the changing rooms before being told the pool was out of action due to vandalism.

She said: “We are supposed to be in a recession and economising, yet someone did this and it will cost a fortune to put right.”

Police Inspector Craig Donald said: “We are keen to hear from anyone who saw two males who may have been aged around 20 in the early hours of Tuesday.