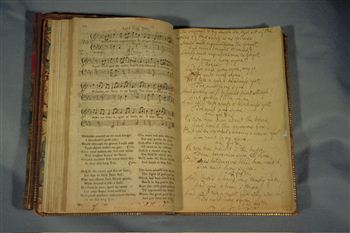 THE original Robert Burns manuscript of Auld Lang Syne is going under the hammer – but the winner will be banned from taking it home.

As one of the world’s most famous songs, experts believe it will fetch over £50,000 at auction.

But instead of taking the treasured book home to keep, the winner will become the “patron” of the song.

All their money will buy is a plaque displaying their name, on show beside the manuscript in the new Robert Burns Birthplace Museum in Ayrshire.
The Hogmanay anthem is one of 250 Burns-related items being “sold off” to help fund the National Trust for Scotland’s Burns project.

Nat Edwards, director of the Robert Burns Birthplace Museum, reckons bidders from across the globe will be keen to sponsor the book.

He said: “This manuscript is hugely important. It’s one of Burns’ best-known songs and it’s an international song.

“This is a unique opportunity for one person to sponsor the preservation of this one item.

“Lots of people sponsor rugby tournaments or other sporting events, but those are fleeting. What we are talking about here is Auld Lang Syne – the song everyone knows around the world.

“This will be popular with people who have a love of Burns and people who understand how relevant Burns is, both in Scotland and internationally.

Burns wrote the legendary song in 1788, setting his lyrics to a traditional folk tune.

He changed the meaning of the originally dark hymn to become a song of celebration – still sung across the world at New Year.

Mr Edwards added: “It was quite a grim song lamenting the fickle nature of human friendship.

“Burns completely flipped the sentiment and rather than becoming a lament of defeat, it became a celebration of the human nature of friendship.”

The money raised by the manuscript’s sale will help curators at the museum, which opens next summer, to preserve all 250 items.

They will all go under the hammer at Bonham’s Auction House in Edinburgh in August.

Miranda Grant, Bonhams Scotland director, said: “We are very excited about this new relationship with the National Trust for Scotland.

“The Scottish sale is a marvellous vehicle to find a new patron for Auld Lang Syne as it has a strong appeal to anyone with a particular affection for Scotland and the arts.”