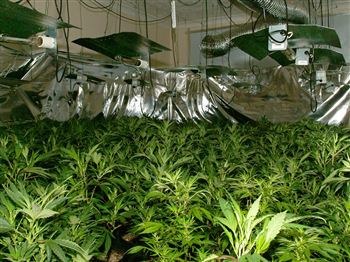 SCOTLAND’S police have taken more than £12 million worth of cannabis off the country’s streets in the past three years as they battle against the rising phenomenon of large-scale cultivation.

Drugs cops have also busted at least 227 Scottish cannabis factories and arrested 445 people for the extensive growing of the recreational drug, since 2006.

The nation’s eight forces have also managed to confiscate over 73,000 plants in the past three years, an investigation using the Freedom of Information Act has revealed.

Industrial farming of the weed has risen considerably over the past three years since the government down-graded the drug’s classification from Class B to Class C.

Drugs experts admit at least 250,000 Scots used cannabis last year and that the new strain of homegrown super-strength cannabis is at least four times as potent as the imported version.

Politicians have described the figures as “a serious problem” which could lead to “serious mental health problems” and have backed the police in their fight against the country’s drug dealers.

Strathclyde Police has been the busiest constabulary in the country in tracking down the green-fingered criminals.

Grampian Police also recorded sharp rises in the amount of plants discovered and the amount of people arrested in connection with the discovery of cannabis farming.

The total amount of factories in the north east was not recorded, but Grampian cops admit last year’s figures show the financial value of confiscated cannabis has shot up by over 500 per cent.

Arrests also doubled during the period, with all but one of the detainees being of Chinese origin.

Tayside Police has discovered 82 factories and has arrested 94 people on drugs charges in the last three years.

And the recently released statistics show the incredible rise in popularity of the cannabis factories with last years figures showing a SEVEN-fold rise in the amount of plants confiscate.

Arrests in the Tayside region have also more than doubled over the past three years with 21 arrests in 2006 jumping up to 45 last year.

The Westminster government made a massive u-turn earlier this year when they decided to re-classify cannabis as a Class B drug, meaning harsher sentences for those caught dealing or in possession.

Home Secretary Jacqui Smith said there was “uncertainty at the least” on the future impact on young people’s mental health as a result of using cannabis.

Therefore she was going to “err on the side of caution and protect the public” by upping the classification level.

No record of factories before 2008

Northern Constabulary recorded no cannabis factories in their area before 2008, but last year discovered nine large-scale operations, although the force says that three of those cases “had no plants involved but were prepared for cultivation”.

Lothian and Borders Police have found 13 of the industrial-sized drug factories on their patch since 2006, six since March, and have arrested a total of 174 people in the process.

They have taken over £1 million worth of the drug off Edinburgh’s streets by confiscating and destroying 4216 plants.

Just two weeks ago firefighters in the capital stumbled across a cannabis farm after a passer-by mistook the pungent smell of the plants for smoke and dialled 999.

Officers were amazed when they broke into a detached four-bedroom house in the plush, up-market area of Cramond after getting the emergency call.

They found all the bedrooms and the loft stuffed with 500 plants capable of producing up to £150,000 worth of cannabis.

“For these gangs it’s just another string to their bow.

“They are typically involved in a number of other strands of serious crime. They can be large groups who are well co-ordinated.”

One theory is gangs are moving north after successful police operations against them in London, Merseyside and the Midlands.

But DI Cunningham said: “We’re working with other forces and the Scottish Drugs Enforcement Agency to tackle the South-East Asian gangs who are now active across the country.”

“We rely on the public for much of the information we use.”

Cannabis has been illegal in Britain since 1928, when a law derived from the International Convention on Narcotics Control came into effect.

The convention was mainly concerned with controlling the Far East’s opium problem, but cannabis was also included by the League of Nations in its list of substances which member states should seek to control, at the behest of Egyptian and Turkish delegates.

The law was applied in a rather erratic manner throughout the UK until the Misuse of Drugs Act in 1971, which introduced the drug classification system and sentencing guidelines.

In 2004, the then Home Secretary David Blunkett approved the reclassification of cannabis from Class B (which it had been since the 1971 act) to Class C.

Dumfries and Galloway Constabulary has busted 16 factories in the past two years and recovered 1493 fully-grown cannabis plants worth an estimated £836,000.

Sixteen people were arrested in connection with the crimes.

Central Police has only had two instances of wide-scale cultivation, but still managed to snare 706 plants worth a total of £225,000.

Meanwhile, Fife Police have discovered six factories since 2006 and taken a massive £1,270,000 worth of cannabis out of circulation.

They have arrested eight people during those operations, seven Vietnamese and one Chinese national, and confiscated 4534 plants.

John Lamont, Conservative shadow minister for community safety, has backed the police in their fight against organised drug dealers.

He said: “These figures simply confirm that in Scotland this remains a serious problem which has got to be tackled head on.

“The reality is that there are all sorts of cannabis on our streets, we have seen a rise in the availability of skunk and super skunk which are incredibly powerful and there is very clear evidence that suggests that these drugs can lead to users having serious mental health problems as well as leading the way to other drugs.

“We must not take a soft touch approach to cannabis – we must tackle this drug head on and educate peoples of the dangers of this drug.”

A spokesperson for the Scottish Drug Forum said: “Various surveys suggest that a minimum of a quarter of a million people used cannabis in Scotland last year showing the market for the drug is considerable and extremely profitable for criminal gangs.

“The recent seizure trends highlight what we have being seeing for some time – a shift from lower strength imported cannabis towards higher strength cannabis produced in so called ‘cannabis factories’.

“The differences in strength of the active ingredients are about 4 times from resin to sinsemilla, although media reports have exaggerated the difference in strength.

“We have particular concerns regarding the ‘binge’ use of the higher strength cannabis and the need for services targeted particularly at this population.”

But, Harry Shapiro, Director of Communications at Drugscope, puts the rise in figures down to increased police vigilance and surveillance.

He said: “Part of the reason the figures for Scotland are so high is the increase in police activity and surveillance concerning cannabis.

“The culprits are almost certainly Vietnamese or Chinese in origin as those nationalities were responsible for the setting up of hundreds of household and industrial unit cannabis factories in Canada a few years ago.

“These days the balance of importing and home-growing cannabis has swung almost full circle.

“But the good news is that recent government statistics show cannabis use among young people in Britain is actually coming down.”