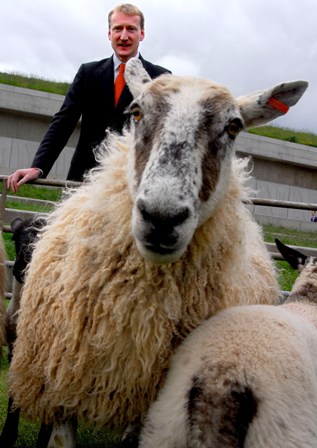 PROTESTORS drove a flock of sheep to the Scottish Parliament to complain about new EWE-ropean Union plans to fleece Scottish farmers with a new electronic tagging system.

Farmer Kelvin Pate brought the sheep and their lambs to meet Tavish Scott, leader of the Scottish Liberal Democrats, who was due to debate the measures later in the afternoon.

Critics say the mandatory scheme would place an unnecessary financial burden on hard-up farmers, and that the plan was not suited to the craggy Scottish countryside.

Scott, himself a former farmer, said that the proposals were not practical, and were the result of woolly thinking from Brussels.

He said: “These sheep tagging plans are unnecessary, unworkable and will push farmers and crofters out of sheep production.

“These plans could damage the financial future of Scottish farms, and I think it’s very important that the European Commission changes its mind.

“The EU’s Agriculture and Fisheries Council met on Monday, but the Scottish government wasn’t even there so they didn’t discuss tagging.

The plan, which will come into force on 1 January 2010, will mean that every sheep must be tagged at a cost of £1.50 per ewe according to EU regulations.

Supporters of the scheme argue that the tagging will prevent outbreaks of deadly disease and infection, such as devastating 2001 foot-and-mouth epidemic that saw more than 10 million cattle and sheep killed.

However the motion has been met with stiff resistance in Holyrood, with the Liberal Democrats leading a revolt backed by MSPs from all parties.

Mr Pate, a sheep and beef farmer from East Lothian, agreed with the plans in principle, but said that the regulation needed to be tidied up.

He said: “What the industry is looking for is somebody to make the system workable without compromising what it’s meant to do in the first place – prevent the spread of disease.

“It’s an extra cost that is unnecessary, as there’s no point putting a tag in a sheep’s ear while it’s grazing for months on a farm.

“We believe that this can work without all the rigmarole put upon us at present.”