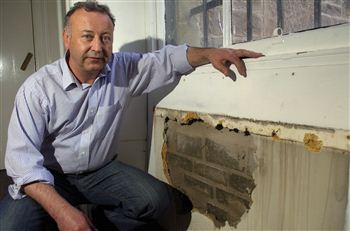 MASKED raiders tunnelled into a mobile phone shop in an audacious £10,000 raid.

The mole-like mob cut phone lines and ripped down alarms before digging their way into the O2 shop in Edinburgh.

Using sledgehammers and chisels to smash their way from the outside into the shop, the pair propped a mattress up behind them to hide from surrounding flats.

They escaped with almost 100 mobile handsets before making their Great Escape-style escape back out the hole.

They even swept up their mess, replaced a radiator against the wall AND bricked up the hole to cover up their handiwork.

Shop owner Harry Hunt was stunned by the meticulous planning of the “very professional” thieves, but fears his business hangs in the balance as a result.

He said: “They tunnelled into the shop by hammering at the back wall, using a mattress to muffle the sound.

“It was a very professional job and had been planned meticulously.

“The police reckoned they had come by earlier on Sunday to cut the phone wires.

“They ripped the alarms down and then tunnelled in through a 2ft-thick wall and robbed us of a lot of phones.” 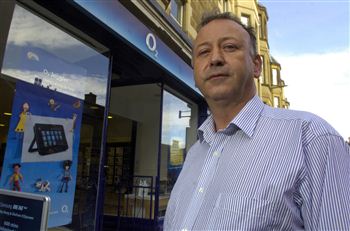 Mr Hunt caught the whole ten-minute raid on CCTV and has given detectives his videotape in the hope they can catch the moles.

But cops conceded the suspects went to “great lengths” to hide their identities, wearing white overalls with hoods and masks during Monday’s 3.50am raid in Morningside Road.

Luckily, Mr Hunt’s recording also includes sound, leading him to the conclusion that his shop invaders are from Glasgow.

He said: “It freaks me out to think they might have been in here pretending to be customers the day before they did it.

“They definitely seemed to know the layout and know where things are, because you can hear them in the tape saying, “there’s the camera,” before they disable it.

“Police officers with 20 years of experience were saying they had never seen anything like it.”

His video shows the breathless robbers kicking through a wall-mounted electric radiator before squeezing through the tight hole.

He believes they even took a pre-planned escape route, to avoid waking residents in nearby flats.

He said: “It seems that during the day they brought a mattress through a close beside my shop towards the back, which they hid behind while getting in.

“I’m certain they took a different route after leaving, jumping through gardens and over a wall at the Kwik-Fit garage.

“It’s very upsetting and selfish that they put eight people’s jobs at risk, when these guys are clearly intelligent enough to get jobs themselves if they’re smart enough to make a clean getaway.”

Now Mr Hunt faces an anxious wait for the result of his insurance claim.

He added: “This is going to damage us really badly. It could very well put us out of business, given how things are going at the moment.

“We opened about 18 months ago and the business has struggled.

“We’ll claim on the insurance but that could take months.

In the meantime I’ve got to pay O2 for the phones.”

Police appealed for witnesses to the stock room raid to come forward.

A spokesperson said: “The suspects have gone to great lengths to stop themselves being identified and we are keen to speak to anyone who was in the area and saw anything suspicious.

“Security measures have been reassessed at the premises.”