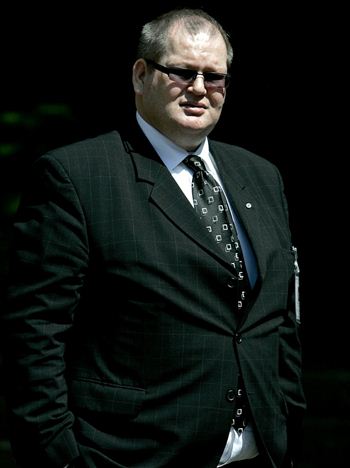 A RELIGIOUS Education teacher has been struck off after showing a sectarian Nazi film to impressionable young pupils in class.

Angry parents complained after one child later told about the shock video clip being played at Vale of Leven Academy, Alexandria.

Teacher Stephen McInally was already on his final warning at the West Dunbartonshire school after giving graphic accounts of sex games in a previous lesson.

He also admitted to allowing a pupil to bypass the school’s online security to access the offensive Youtube clip.

Now the 47-year-old’s career looks to be in tatters following a hearing of the General Teaching Council for Scotland (GTCS) in Edinburgh.

The GTCS panel also decided that the disgraced former-teacher’s name should be referred to Scottish Ministers and that he should be disqualified from working children in the future, after finding his actions “had placed children at risk of harm”.

Yesterday, the panel heard how Mr McInally showed a video clip from YouTube taken from a film called ‘Downfall’, about the last 12 days of Hitler in his bunker at the end of World War II, to a class of S4 pupils.

It had subtitles which had been altered so rather than the original script, contained derogatory remarks about Roman Catholics.

The spoof was littered with phrases like “Fenian bastards”, “dirty Taigs” and the “Billy Boys”, the hearing heard.

Mr McInally told how he had been sent the video by a Rangers supporting friend the evening before.

And although already on a final warning from the school for making lewd sexual remarks to his class, he yesterday blamed depression and the affects of diabetes on his erratic behaviour.

He told the hearing in Edinburgh: “I admit I lacked judgement at the time but did not realise why.

“The medication I was taking was affecting me.

“I shouldn’t have even been in the classroom at the time.

“It wasn’t a particularly good time in my life and the kids could have picked up on that, although I’m not trying to say they smelled fear.”

The showing of the video took place in February 2008 where he was teaching an S4 Higher English class after being asked to stand in for the regular teacher who was off that day.

GTC lawyer Robbie Burnett described how after showing the sectarian video, an S2 pupil from another class got to hear about it and told their parents.

That triggered a complaint to the school and he was suspended because of an incident in October 2007 where he went into graphic detail about adult sex games.

The hearing heard during a conversation about teenage sex, the teacher admitted to telling his class there were other ways to enjoy sexual relations, such as “sticking you finger up her bottom”.

Not one pupil admitted later that the comments had anything to do with the class topic of the day.

He was subsequently hauled before the school’s disciplinary team and handed a final written warning.

Following the sectarian video incident McInally was suspended and eventually sacked in July 2008.

Mr Burnett said: “These offences are of a serious nature and Mr McInally should in my opinion be removed from the register.

“What we have is conduct that is disgraceful and reprehensible.

“He seems to have allowed himself to be drawn towards those kinds of topics by the class.

“His decision making was a flagrant disregard of school policy and wholly unacceptable.

“The proper decision would have been not show the video.”

Children at risk of harm

In striking off the teacher, the GTCS panel said: “The sub-committee was unanimously of the view that the respondent had shown a complete disregard for the standards of professional conduct expected of a teacher.

“It considered that each charge, individually, merited removal of the respondent’s name from the register.

“The sub-committee considered that, through his conduct, the respondent had demonstrated a consistent and persistent lack of judgement, an inability to maintain appropriate professional boundaries and an inability to exercise the professional guidance and leadership expected of a registered teacher.

“After weighing all the factors in the balance, and in the exercise of its discretion, the sub-committee was unanimous in its view that it had no option other than to direct removal from the register.

“The sub-committee has decided that your name should be referred to the Scottish Ministers for consideration in connection with inclusion on the list of those disqualified from working with children under section 4 of the Protection of Children (Scotland) Act 2003.

“It was the unanimous view of the sub-committee that the respondent’s actions as detailed in the charges had placed children at risk of harm.”