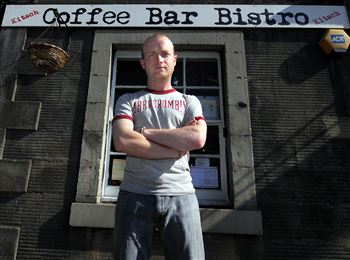 SCOTLAND’S youngest Michelin-starred chef has forced a nearby bistro to change its name.

Despite his restaurant serving up haute-cuisine compared to Mr McCarthy’s toasties and pies, Mr Kitchin instructed to lawyers to send formal letters insisting the new business changed its name.

Mr Kitchin – who appeared on this year’s Great British Menu – opened his high-end eatery three years ago at Commercial Quay in Leith, Edinburgh.

But Mr Kitchin called in legal eagles after Mr McCarthy opened the Kitsch-in in nearby Bernard Street last December.

Mr McCarthy, 30, said he was “taken-aback” by the letter which, he claims threatened legal action.

He said: “We received a lawyer’s letter on Christmas Eve last year, it said that we had to change the name or they would take us to court.

“I was taken aback, we are just a coffee bar serving sandwiches, cakes and pies, he is a Michelin star chef.

“There is no way we are competing with him and it is a completely different spelling with a hyphen in it anyway.”

The 1970s themed café played on its kitsch image to come up with culinary moniker but has now changed its name to Kitsch after Mr McCarthy admitted he could not afford a drawn out legal battle.

Mr McCarthy added: “A lot of people said it is a shame that we could not keep the name but I just could not afford to fight it.”

Representatives of Mr Kitchin insisted the issue had been dealt with “amicably” but admitted that lawyers’ letters had been sent.

A spokesperson for The Kitchin restaurant said: “After an identically pronounced new dining venue opened in close proximity to The Kitchin earlier this year, management took very sensible and amicable steps to reduce any possible trading name and registered trademark confusion, protect both brands, and reach a workable compromise.

“The matter was resolved with the legal advisors of the then Kitsch-in speedily some months ago, and there has been no further legal communication since.”