A HEARTS fan has walked free from court after admitting invading the pitch during an Edinburgh derby. 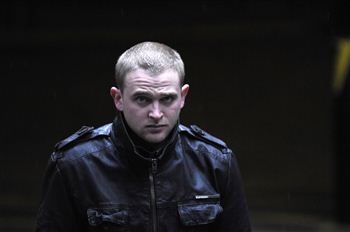 Robert Philips, 25, was one of two men arrested following the incident at Tynecastle during the capital clash earlier this month.

The electrician was bundled from the pitch by stewards and spent a night in custody as his side went down to their bitter city rivals.

Philips was banned for life by Heart of Midlothian bosses and told he could face a jail sentence when he appeared following the May 7 incident.

But  at Edinburgh Justice of the Peace Court he was admonished and dismissed after a justice said the offence was “impulsive and inexplicable”.

Fiscal depute Robert Freeland said Philips jumped over the barrier and invaded the pitch after Riordan’s penalty in the 70th minute.

Mr Freeland said: “It was around 21.20 hours at a game at Tynecastle Football Stadium during a match. At this time there was a penalty scored by a Hibernian Player.

“Philips jumped over the safety barrier and ran onto the pitch. On seeing him running on the pitch he was pursued by safety staff.”

Mr Freeland said Philips was escorted off the playing field by stewards before being charged with police.

Philips’ solicitor, Nigel Bruce, said the incident was “born out of frustration” as his client witnessed his side losing a match they were expected to win.

He added that the first offender had been the victim of jokes at his work following the incident and was concerned about the impact a criminal conviction could have on plans to travel and charity work.

Mr Bruce said Philips had already travelled in Australia and hoped to go again. He added that his client had given spare time to a children’s cancer charity.

Two letters of reference in support of his client’s character were produced and Mr Bruce and asked that the court take the unusual step of an absolute discharge – leaving no conviction on Philips’ record.

But Justice of the Peace Les McEwan said: “I have listened very carefully to the circumstances narrated by the fiscal and to what Mr Bruce has said on your behalf. And I have read very carefully these glowing references.

“All this points to an impulsive and inexplicable act by someone who has never been in trouble. I don’t think given the nature of the charge that I can go as far as an absolute discharge.

“I’m going to admonish you, don’t do it again.”

A second man, Ryan Wyllie, 16, has already been fined £400 over the incident. The apprentice plumber vaulted a safety barrier and “squared-up” to Riordan.