SCOTS actress Karen Gillan has been unveiled as Dr Who’s next companion.

The stunning 21-year-old from Inverness will star alongside the next Timelord – former Party Animals actor Matt Smith – in the hit BBC adventure series.

But fans of the show may already remember Karen, a former student at Edinburgh’s Telford College, from when she starred as Soothsayer in a 2008 episode: The Fires of Pompeii. 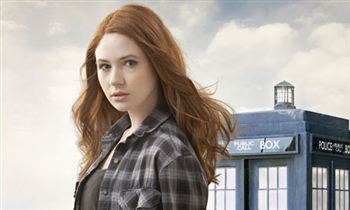 She said: “I’m absolutely over the moon to have been chosen.

“The show is such a massive phenomenon that I can’t quite believe that I’m going to be a part of it.”

Beautiful Karen was cast by Steven Moffat, the show’s new lead writer and executive producer, who replaces the outgoing Russell T Davies. And she says she can’t wait to team-up with the new Doctor in Matt Smith.

She said: “He is an incredible actor and it is going to be so much fun to act alongside him – I just can’t wait to get started.”

For his part producer Moffat said her Tartan roots ensured she was a perfect fit.

He said: “We saw some amazing actresses for this part but when Karen came through the door the game was up.

“Funny, clever and gorgeous and sexy – or Scottish – which is the quick way of saying it.”

She also starred opposite Ken Stott in the Question of Blood episode of Scots tech drama Rebus and several episodes of the cult Kevin Bishop Show.