SCOTTISH conservationists fear the reintroduction of beavers to the country’s rivers will lead to plummeting fish stocks.

The Salmon and Trout Association (STA), Britain’s leading gamefish conservation body, have warned the return of the animals will have an adverse impact on fish populations – in particular trout and salmon.

The main problem, the organisation warns, is the building of the beavers’ dams which will inhibit the flow and return of migrating fish stocks.

The report concludes that, unless beavers are removed or culled on an ongoing basis, the result will be “the demise of salmon runs” in at least three of the island’s rivers and will put salmon runs “in jeopardy” in a further seven.

The STA warning comes on the eve of the release of four families of beavers into the wild in Knapdale, Argyll.

Last May, Environmental Minister Michael Russell granted a license to the Scottish Wildlife Trust and the Royal Zoological Society of Scotland for a trial reintroduction.

The beavers arrived in Britain last November and have spent the last six months in a quarantine unit in Devon.

The beaver families are due to be released back into the wild today. (Fri) 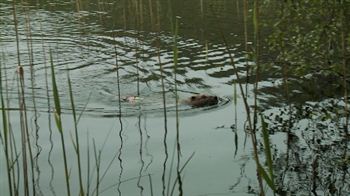 He said: “This report is unequivocal in its conclusions and it should be required reading for those who have granted the Knapdale beaver license.

“While the American beaver is a different species to its European cousin, both species share a propensity for dam building whenever the available habitat is not to their liking.

“Beaver dams are, of course, the problem and on either side of the Atlantic they can amount to insurmountable obstacles to migrating salmon, sea trout and brown trout, particularly when, as is normally the case, there is little depth of water below the dam.

“It [the report] concludes that “beaver blockages appear to be the main reason”.

Mr Knight also states that after having beavers on Prince Edward Island for the past 60 years “their impact on salmon numbers has been little short of catastrophic”.

He is now insisting the Scottish Government commission proper scientific research into the impact the animals will have on migratory fish populations.

Nick Yonge, Director of the Tweed Foundation, which has campaigned against the Knapdale release, said: “The Prince Edward Island report underlines how stupid it would be to introduce beavers to Britain.

“Introducing animals that make major changes to our countryside is only acceptable where those changes can be contained effectively to specific areas.

“The evidence from countries where beavers have been introduced is that they cannot be contained and that they would cause harm to our native fish stocks by building dams.

“I believe that the Government and their advisors now understand this and I expect it to be reflected in their future plans for species introductions.”

But a spokesperson for the Scottish Wildlife Trust has hit back at the STA claims by insisting the beavers’ reintroduction should have no detrimental effect on the area’s fish stocks.

“There are no Atlantic salmon in the trial site and we believe this site is large enough to sustain the natural expansion of their population over the next five years. The project partners have no plans to reintroduce beavers in other sites across Scotland at present.

“The Scottish Government has asked Scottish Natural Heritage to coordinate the independent scientific monitoring of the trial in order to assess the effect of beavers in the trial area, including any effects – both positive and negative – on the resident fish population.

“The future of beavers in Scotland is a decision that will be made by the Scottish Government once the findings of the trial have been evaluated.”