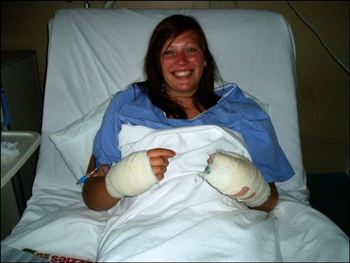 A SCOTS teenager who was mauled by a lion has spoken of her shock after her friend was killed by a tiger – at the same animal park.

Lisa Baxter, 19, was scarred for life after a lion savaged her hands at Zion Wildlife Gardens in New Zealand, where a rare white tiger has now claimed the life of one of her former colleagues at the park.

Lisa spoke of her shock after she found out Dalu Mncube, from South Africa, had been killed.

She said: “You know it’s a dangerous job but you don’t expect something like this.

“I knew Dalu very well, he was a nice guy who took me around the place and taught me a lot of things about the big cats.

“Dalu was a good handler who really knew the cats.”

The 26-year-old South African was attacked after he entered the tiger cage with a colleague on a routine check.

He died before help could arrive after suffering brutal injuries to his stomach and lower legs as horrified tourists looked on.

The tiger, a 560-pound white Bengali named Abu, had to be shot dead because it wouldn’t release the body.

Lisa, now a dolphin trainer in Mexico, said she didn’t understand why the attack took place.

She said: “They can be freaked out by visitors’ pushchairs or umbrellas. 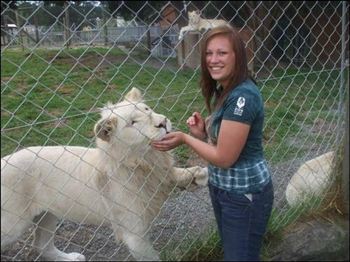 “Maybe something outside the cage sparked this attack – as usually the tigers just get scared and hide in a tree.”

Lisa herself was badly bitten last year when she put her hands through a fence to stroke an 18-month-old lion, while she was giving a tour.

The lion, called Timba, then sank his razor-sharp teeth into her hand.

As she calmly tapped the lion on the nose – so as not to anger the other lions in the enclosure – he bit her other hand.

Lisa’s wounds were so wide that she needed 13 stitches and had to stay in hospital for four days.

She added: “Despite that I really miss the big cats – what’s happened is a tragedy.”

The Zion Wildlife Park, which is run by TV’s “Lion Man”, Craig Busch, has been closed for the time being.

Dalu – who was Busch’s right-hand man – had rescued a colleague in February from the same tiger.

Dalu plunged his fingers into the tiger’s mouth and turned a fire extinguisher on it until the staff member could escape.

Scots zoo devastated after having to euthanize beloved rescue lion