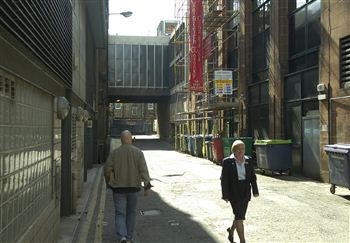 A CLOTHING store has agreed to pay council chiefs a massive £290,000 – for a slice of fresh air.

High Street giant Primark are taking over the former Marks and Spencer store on Princes Street, Edinburgh, which has a connecting bridge at the rear of the building.

But despite owning the bridge, it cuts through air space owned by the city’s local authority – meaning they are forced to shell out the small fortune.

Edinburgh Council bosses are claiming it is a good deal for taxpayers as they are allowed to collect ‘air rights’ payments if any buildings overhang any of its property.

The air rights are for a space equivalent to around 2,500 square feet above the bridge up to the fourth floor of the Princes Street building.

But opposition politicians have warned the city leaders not too price prospective businesses out of investing in the capital.

Councillor Tom Buchanan, the city’s economic development leader, said: “This deal clears the way for Primark to open a new store on Princes Street and is good news not only for the taxpayer but for the city centre.

“The arrival of Primark in Edinburgh will be warmly welcomed by shoppers and shows the council’s efforts to breathe new life into the city centre are bearing fruit.”

Councillor Cameron Rose, Edinburgh’s Tory finance spokesman, said: “We need to ensure that Edinburgh remains an attractive proposition so we need to keep an eye on these sorts of things.

“However, I am delighted that Primark is making an investment in Edinburgh and it is a welcome boost to the continued rejuvenation of Princes Street.”

Although a common occurrence in larger cities such as London and New York, charging for air rights is extremely rare in Scotland’s capital.

The firm wanted to re-develop the building but an overhang onto the street below meant it was required to stump up £49,000 to the council for air rights.

Primark are expected to submit an application to carry out a £12 million refit of the Princes Street store in the next few weeks and hope the work will be done in time for a Christmas opening.