A SCOTS schoolgirl fought back tears today as she laid flowers on the bank of the river at the spot where she had watched her best friend drown less than 24-hours earlier.

Sindy Collins, 14, told how she could do nothing to stop Martin Moriarty, 13, being pulled under the water as they played in the River Tweed on Sunday evening after he was overcome by sudden strong currents.

The glorious weekend sun had attracted the youngsters into the water with friends in the Borders town of Kelso before tragedy struck, leaving the whole town in mourning.

Heartbroken Sindy – best friends with Martin at Kelso High School – told how she had attempted to reach her pal but was unable to pull him from danger as he was weighted down by his denim jeans and unable to fight the pull of the river.

She said: “Martin had dinner at my house and we were going swimming in the ‘Cobby’ because the water is shallow.

“But there was a big drop in the floor which we weren’t expecting. We fell into it. I managed to get out, but Martin couldn’t.

“I reached out a hand, but he couldn’t grab it and he went under.”

“He was trying to keep up, but you could see the water trying to pull him.

“He mustn’t have had the strength because he had heavy jeans on.

“His face just went up and he just kept splashing.

“Then he just disappeared.”

“At first we thought he was only joking, but we soon knew he wasn’t.”

Sindy said the friends had gone to the banks of the River Tweed where it meets the River Teviot a popular spot for local youngsters.

But the sweltering heat made the water irresistible and tragedy struck at around 6.30pm. 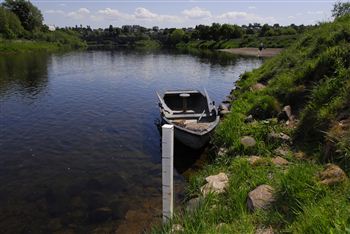 Police, fire and ambulance all attended quickly as well as a specialist water rescue team from Galashiels.

But after being recovered from the water he was pronounced dead at Borders General Hospital.

Sindy, who lives just yards from Martin’s home in the town’s Hendersyde Park, said that Martin was her “the best friend you could find”.

And she urged others not to swim in open water, saying: “I thought it was okay – but now I know it is so dangerous. I would tell other people not to it.

Her 40-year-old mum Martina said Martin was “a lovely boy” who was always willing to help.

She added: “They did everything together and were only apart at night.

“He was a lovely boy, pleasant all the time and always wanting to help.”

“I just cannot believe this has happened.”