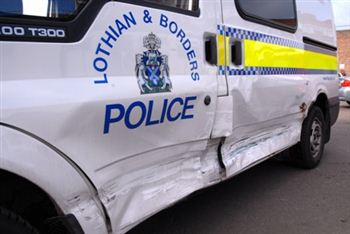 BUNGLING Scottish cops have inflicted almost £200,000 worth of damage to their own cars since the start of 2008, according to newly released figures.

The huge figure is more than twice the amount caused by attacks from vandals – just £84,000.

Other excuses for costly damage include gusts of wind, reversing into other police vehicles, and even striking pedestrians – all at a hefty cost to the taxpayer.

Scotland’s largest police force, Strathclyde Police, alone caused more than £100,000 worth of damage, trashing almost 250 of their own vehicles.

A spokesperson for Strathclyde police said: “Strathclyde Police Force has a fleet of 1,200 vehicles which are utilized 24 hours a day, covering a geographical spread of 5,500 square miles.

“Police officers and vehicles operate within the diverse terrains of inner city, rural and semi-rural areas and across all sectors of the police service and with involvement in such diverse territories, and as such potential hazards are daily occurrences.

“With the aim of reducing police vehicle incidents, market products and vehicle specifications are reviewed on a continuous basis and where it is financially viable preventative mechanisms are implemented to increase safety and provide cost benefits. “

One officer with Dumfries and Galloway police force wrecked his car to the tune of almost £400 after a handbrake failed for “reasons unknown”.

The official entry reads: “Vauxhall Astra Vehicle has rolled backwards downhill before coming to stop in a field. Driver claims that the vehicle handbrake was fully applied on leaving the vehicle parked. Reason for handbrake failure unknown. Carelessness. Cost: £357.” 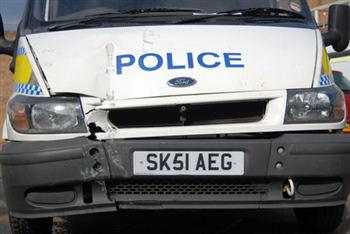 Commenting on the figures, the Royal Society for the Prevention of Accidents said that police drivers should be leading the way with careful driving, and in particular watching out for animals.

Carl Christopher, a spokesman for the RoSPA, said: “The best thing drivers can do to prevent hitting an animal is to do what they should be doing anyway – that is to focus on the task in hand, because driving is a skill which requires concentration.

“Safe driving always requires concentration and focus, whether the person behind the wheel is a police officer or any other member of the public.

“However, highly-visible motorists such as the police do have a part to play in setting a good example to other road users.”

He added: “In terms of how dangerous animals can be to motorists, it can depend on their size and the speed of the motorist – hitting a cat is clearly different to hitting a deer for instance.

“But we would stress that a collision of any kind, involving an animal of any size, can have very serious consequences.

The next highest total after Strathclyde Police was recorded by Lothian and Borders, who sustained more than £150,000 worth of damage.

The amount caused by driver carelessness was not recorded –however officers did see fit to claim almost £6,000 for animal collisions and recorded hitting two pedestrians.

Strathclyde Police also put £206.24 of damages down to hitting members of the public, as well as being the victim of more than £50,000 worth of malicious vandalism.

Despite having the smallest police force in the United Kingdom, Dumfries and Galloway recorded the most animal damage out of Scotland’s police forces – almost £8,000.

The constabulary of the largely rural area struck a wide variety of wildlife including several deer and two “large birds”.

One smash involving a badger did almost £2,000 worth of damage alone. 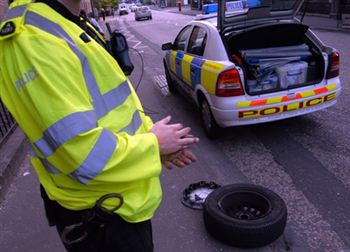 As a portion of the total damage, Fife’s police force were the worst offenders for trashing their own vehicles – almost half of the £82,2213.75 worth of wreckage was caused by their hapless drivers.

Officers in the Kingdom smashed 21 of their cars, leaving three completely written off at a cost of more than £16,000.

Tayside and Grampian police forces didn’t detail damaged caused by officer actions, but they suffered around £11,000 in vandalism.

Northern recorded just £26,000 in all damage to vehicles – although more than half of this total was caused by police driving.

There are no recorded figures for Central Scotland Police force.

They claimed a “manual trawl” through their records would cost them too much money.

The total damage to Scotland’s police vehicles overall was just over £1.2million and takes account of all incidents including driver error, accidental collisions and vandalism since January 2008.