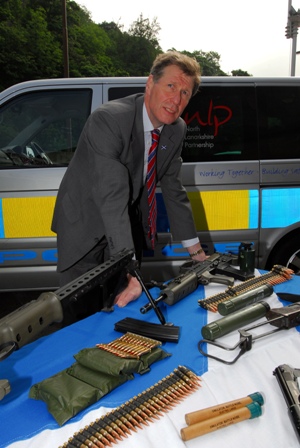 UNDER-FIRE Justice Secretary Kenny MacAskill came out guns blazing yesterday at the launch of a new crackdown on organised crime.

Vowing to thwart Scotland’s criminal gangs, he announced a huge boost in recruitment and funding to the country’s top crime fighting agency.

The £4 million funding package will create 80 new posts at the Scottish Crime and Drug Enforcement Agency (SCDEA), including e-crime experts and covert officers.

Posing with a cache of weapons seized by police, MacAskill warned that organised crime was a serious threat to Scots’ safety.

He said: “Serious organised crime hurts our country in terms of public safety, the economy, and jobs.

“We need a co-ordinated approach to ensure the whole country stands up against it – on the streets, within our communities, in civic society, and in the wider economy.

“For the first time we now have a national strategy to tackle serious organised crime that goes beyond law enforcement.

“We know more about who they are, who they work with and what they are doing. Put simply, we are on to them and we will use that intelligence against them.”

Figures released alongside the launch revealed the extent of Scottish criminal gangs, showing that more than 350 groups operate throughout Scotland. 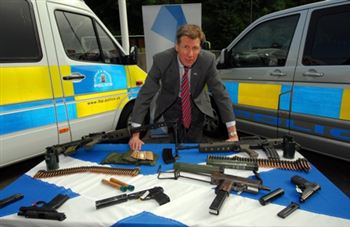 Nine out of ten deal mainly in the drugs-trafficking trade, and more than half have easy access to deadly firearms.

He said: “My objective has always been to ensure that we don’t just chase organised criminals, we get ahead of them – in pursuit of this goal, knowledge is power.

“Tackling serious organised crime will be a priority for all Scottish police forces, and we will mobilise and pool our resources against those causing the most harm.

“Today, thanks to the ground-breaking work of our mapping initiative, the balance of power has shifted a little in our favour.”