Spaniel nose how to get his paws on the crooks’ cash 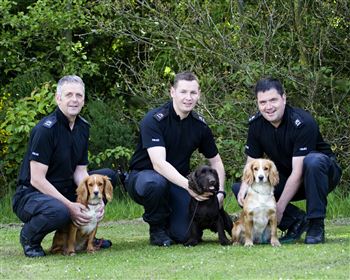 Rocco, an 18-month old Cocker Spaniel, was handed in as an unwanted pet after his Scottish owners moved abroad.

He could have been orphaned or gone astray.

But instead Fife Police hope he will help them collar crooks instead after he was trained to sniff out money.

As the Fife force’s first ever cash detection dog, the new recruit will greet visitors coming off Scotland’s recently revived ferry link with Zeebrugge.
He will help officers based at the Rosyth port to ensure no contraband gets in from the continent via the Belguim ferry.

Rocco has just completed six weeks of training with handler PC Paul McIlroy to use his super-sensitive nose to get his paws on Euros and Sterling which could be the proceeds of crime.

He’s expected to stop millions of pounds of drug-coated cash filtering into the economy, as police aim to nip a potential new drugs trade route in the bud.

Fife’s dog section Sergeant Davy McKelvie said that while the Force had always used Springer Spaniels in the past, Cocker Spaniels made particularly good search dogs.

He said: “These dogs, along with their handlers, played a significant role in the seizure of more than £3million of drugs last year.

“The unique skills that these new recruits possess, strengthens the ability of the force to deliver on its policing plan pledges to tackle crime and maintain safer neighbourhoods across Fife.”

Rocco is one of three new recruits to the force’s 26 -strong dog section; along with Cocker Spaniel sisters seven-month-old Isla and Gem, who are currently undergoing basic socialization training.

In one case a 66-year-old woman had £1,500 swiped from her account by a man who contacted her with her name and knew she was an HBOS customer.

Police believe the same man, who spoke with an Asian accent, targeted a 78-year-old woman and duped her into giving personal details and her International Bank Account Number (IBAN), the international standard for identifying bank accounts across borders.

A short time later the fraudster tried to transfer £27,000 out of her account into a bank account in India.

Luckily for the pensioner, the HBOS staff intervened quickly and the transaction was not completed.

Detective Chief Inspector Bruce Kerr, head of the Perth CID said: “We are working closely with the bank in a bid to track down those responsible.

“Those involved in this fraud would appear to be well organised as, on both occasions, the man calling already had some personal information about the account holders, helping to lull them into a false sense of security.

“The man claims that the account holder has been overcharged on their respective accounts and that he needs to confirm account details before he can proceed. Sadly, some people have given out or confirmed account details not realising that they are not actually talking to someone from the bank.

“I must stress to all members of the public that they should never disclose or confirm any personal information over the phone, particularly bank details. If you have any doubt or any concerns, please go into your local branch personally.”