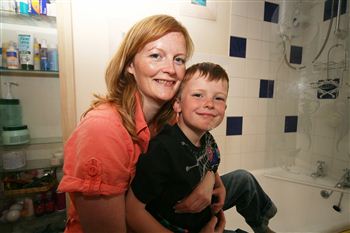 A YOUNG Scots boy is being hailed a hero after he overcame his nightmares to help save his mum’s life.

Sean Hamilton, five, was woken in the middle of the night by a load moaning.

After shouting out for help, brave Sean went to the bathroom and found his mum Louise lying unconscious in a pool of blood.

The quick thinking toddler put her in the recovery position, covered her in a blanket and telephoned dad, Steven, 37, for help.

Louise had woken up with a pain in her head and neck and had gone into the bathroom looking for painkillers.

It is thought she collapsed and smashed her head on the edge of the bath.

Dad Steven, a community inspector at Kirkcaldy Police Station, called an ambulance before rushing home to help his stricken wife.

Louise, 36 from Kirkcaldy in Fife, said: “I had a terrible pain in, my neck and went to the bathroom to get painkillers.

“The next thing I knew I was lying on the bathroom floor covered in blood.

“I was drifting in and out of consciousness and could hear Sean talking to me trying to wake me up.

“Incredibly, he knew all the right things to do like putting me on my side and covering me with a blanket.

“I’m so proud of him because I really real he saved my life. Anything could have happened to me if he hadn’t have woken up.”

Scared of Wallace and Gromit character

Little Sean overcame his fears to help his injured mum as the brave schoolboy suffers from nightmares.

He often believes the were-rabbit character from Wallace and Gromit is out to get him.

Louise, a children’s charity administrator, added: “For him to come to my aide in the middle of the night shows how brave a boy he is.

“For all he knew the moaning he heard could have been the monster he is scared of.”

After the accident on May 23, thought to have been caused by low blood pressure, injured mum Louise spent a week recovering in hospital.

She received three stitches to the deep wound and still has no feeling in that side of her face.

Dad Steven admitted he wasn’t sure how little Sean knew how to put his mother into the recovery position but was pleased his son reacted so quickly.

He said: “After he made Louise comfortable, he woke up his two sisters and they all kept talking to Louise to keep her awake.

“Louise was then taken to the hospital and the cut on her head, which was right down to the bone, was stitched up.

“I hate to think what could have happened if Sean hadn’t got up. It must have been terrible for him to see his mum lying like that.

“He is the real hero in our eyes.”