BIRTHDAY balloons were today tied to the spot where a tragic dad was killed in a horror hit and run accident – the very day he would have turned 31.

Instead of celebrating with him, the shattered family of gas worker Paul Bonnar were left consumed by grief, mourning their beloved son, brother, father and husband.

His birthday presents, already bought and lovingly wrapped in preparation for his big day, left unopened. 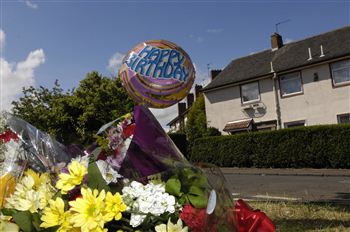 If that tiny reminder of their loss wasn’t cruel enough, tomorrow (tues) would have been the day he and his beloved wife Lorna would have celebrated their wedding anniversary together.

Now she has been left to try and find the courage and words to explain to their 12-year-old daughter how and why he was taken from them so suddenly on Sunday morning.

But with no answers and no-one as yet held accountable for his death, all she and their grief stricken family could do was appeal for help in tracking down the cowards who fled the scene, leaving devastation in their wake.

In a brief, yet emotionally charged joint statement issued yesterday, the family appealed for help in identifying whoever was responsible.

It read: “Paul was a loving husband, father, son and brother and his death in such tragic and sudden circumstances was a shock to us all.

“He was taken from us at far too early an age but we hold in our hearts the happy memories that we all shared.

“We remember Paul as a gentle natured and loving, caring man. He touched the hearts of all who knew him and was much loved by us all.

“As a family we would urge anyone who has information regarding Paul’s death to come forward and assist the police in their investigation.”

Paul was struck by a stolen sports car in the early hours of Sunday morning in the Inch area of Edinburgh.

Shortly after a night out with friends at the local pub, the Robin’s Nest, he had been walking along Walter Scott Avenue when the white Mitsubishi Evolution hit a speed bump and ploughed into the helpless pedestrian.

The driver of the car screeched off into the night, the wreck of the car being found burned out at the Wisp a few hours later at 3.30am.

Paul died from his injuries at Edinburgh Royal Infirmary, the news broken to his relatives by grim faced detectives in the small hours and a determined police hunt begun in earnest to capture those responsible.

Investigators learned early on that there had also been what was described as a “nasty disturbance” in the same street just 10-minutes before he was hit by the stolen car.

Chief inspector Andy Gilhooley said: “There was a large disturbance about 10 minutes before the accident.

“It seems a man and a woman were being set upon by between five and 10 males and females.

“The next thing that happened was the stolen vehicle came down at speed and collided with the victim.

“Someone got out the car and attended to Mr Bonnar very briefly.

“They then got back into the car and headed off in the direction of Gilmerton Road.”

Shocked local spoke of medics working on the stricken dad as long as they could before rushing him in vain to hospital.

Christine Ramage, who lives opposite the scene, said: “There was an ambulance and several police cars outside.

“The ambulance seemed to take ages to go. It’s such a shame for his family.”

As his family gathered together at Paul’s parents Maureen and Gerry’s house yesterday, the shock, anger and hurt was etched upon the face of all those coming and going.

Friends could barely speak, his family numb with grief.

Instead it was left to the clutch of handwritten messages left amid the flowers and balloons at the spot where he died to sum up the deep affection people felt for him. 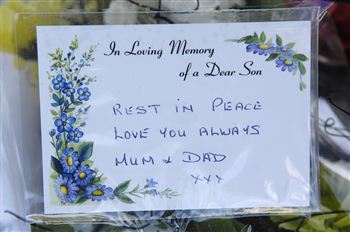 One read: “Paul, you were a brilliant friend. Thanks for all the memories, laughs and good times. Thinking of you always, Laura and John xx.”