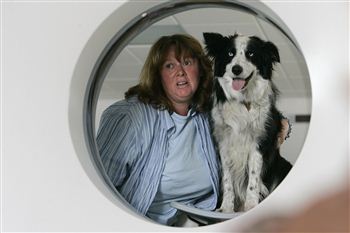 A NEW vet clinic has been given a thorough inspection by a canine expert – a cancer-beating border collie.

Six months after defying the odds and recovering from cancerous lymphoma, Scrooble competed in Crufts.

And yesterday he was back at the clinic to check out the facilities at the University of Edinburgh’s new cancer centre.

The seven-year-old pooch is back to his energetic self after undergoing a gruelling eight months of chemotherapy for his cancer.

“Jump on the table”

His owner, Sara Hawkswell, from Armadale in West Lothian, said that Scrooble quickly got used to the hospital during his treatment.

She said: “Scrooble was so used to coming in for treatment that he would look out for anyone he knew walking past in the waiting room and then, when it was time for his treatment, he would jump right up on to the table.

“The staff were always incredibly friendly and helpful.”

The brave pet starred in the 2008 Flyball agility contest at the prestigious dog show Crufts and has been bursting with energy ever since.

Sara said: “Scrooble is now full of energy, competing in agility at shows most weekends, and since his recovery has gone up two agility grades.”

The Veterinary Cancer Care centre opens today and will treat up to 20 animal cancer victims a week.

Filled with state of the art equipment, including a CT scanner that can accommodate horses, the centre will offer radiotherapy, chemotherapy and surgery to suffering animals.

And as well as treatment, the centre will carry out research that will not only help animals, but could potentially help find treatments for humans with cancer as well.

The scientists at the Vet School have already discovered a cancer stem cell in dogs that may help find treatments for bone cancer in children and adolescents.

Professor David Argyle, centre director, said: “The centre will have the most sophisticated diagnostic procedures, followed by comprehensive cancer therapies for pets, including a linear accelerator to provide radiotherapy.

“Our understanding in treating cats and dogs and how cancer takes hold will also pave the way for comparative research, relating what we know about the disease in animals to humans to improve treatments for all.”

The rate of cancer in pets is soaring as animals start to live longer – but new treatments have led to a better chance of survival.