Ducks on the run in city centre 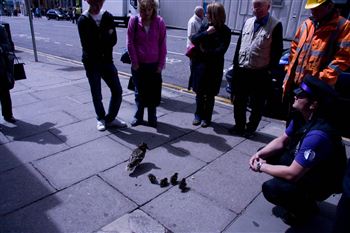 A FAMILY of ducks caused chaos in the centre of a Scots city as they tried to cross a busy main road.

The mum and her four offspring were waddling up from Princes Street towards George Street when eagle-eyed tram workers spotted them.

Worried that they would be killed by the busy traffic up ahead, workers tried to pen them in as they called the Scottish SPCA.

Daryl Young, 22, from Musselburgh, East Lothian, was one of the workers that come to their aid last Friday.

“She would get killed”

He said: “It was my colleague John who saw her, walking across Princes Street with her four ducklings, heading up Frederick Street. It was about midday.

“He was really worried she would get killed if she crossed the road, so he followed her up the street.

A team from the Scottish SPCA were at the scene after about 20 minutes and rounded up the birds with help from passers by.

Daryl said: “As soon as the net was put over the mother, the babies scattered. People were diving under cars to catch them.

“Good deed for the day”

“Eventually we got three, but one was being a little terror. I managed to catch it in my hand and put it in the net.

“I felt quite chuffed with myself – definitely a good deed for the day.

“It’s nice for the tram workers to be perceived as doing something good for once, too.”

He said: “There was just no way she would have made it across the road. We were half way down Frederick Street and we managed to stop her and the ducklings.

“Everyone was coming over, taking pictures and having a look at what was going on, including tourists.”

Scottish SPCA ambulance driver Fiona Thorburn checked the ducks over before releasing them into the Union Canal at Slateford.

She said: “Luckily for this family, we were called in time to rescue them and I’m pleased to say they are now safely returned to the water.”

And she also revealed that this isn’t an uncommon problem, as mother ducks like to nest in high places away from danger.

Fiona said: “Sometimes she will fly some distance from water to find that high spot, not thinking two steps ahead to when the babies arrive and they need to get back.

“We’ve rescued ducklings from the roof of the National Museum, from the top of the Standard Life building, and from rooftop gardens and window boxes.

“When food and water supplies become low, the mother will either fly off or try to lead her chicks to water, hence we occasionally get time like this, when we find them waddling across the middle of a busy street.”