Baby pine martens rescued after being found abandoned and starving 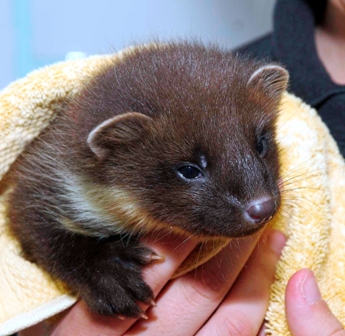 A PAIR of abandoned baby pine martens are being nursed back to health by the Scottish SPCA after falling from their nests.

Concerned members of the public handed in the pine martens, which resemble large weasels, after finding them lying abandoned, starving and exhausted.

Nine-week-old Aspen was discovered near a cottage in Banff, Aberdeenshire after tumbling out of her chimney-top nest, while walkers at Farr, near Inverness, stumbled across three-month-old Rowen who was lying on a path.

Both animals are now being looked after by trained staff at the SSPCA Wildlife Rescue Centre near Dunfermline, where they will be nursed back to health over the next two to three months.

Collin Seddon, manager of the centre, said: “These young pine martens were found in the daytime, lying out in the open, which is unusual for this typically nocturnal animal so clearly there was a problem and the people that found them did the right thing in contacting us.

“Aspen, the little female, was small and weak when she first arrived at the centre, but thankfully she had not suffered any injuries from her fall from the nest.

“Rowan, the male, was thin and very quiet, but he’s put a bit of weight on now and both pine martens are beginning to show their characters.

“It’s really important to keep them as wild as possible to give them the best chance of survival on release, so we will be moving them to a quiet enclosure with minimal handling to continue their rehabilitation.”

Roughly the size of a domestic cat, pine martens are an endangered species and were once widely hunted for their fur. 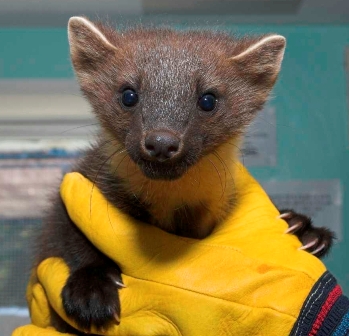 Although at one point close to extinction themselves, they are actually highly-efficient predators and are widely thought to be responsible for controlling grey squirrel numbers in the UK.

The pine marten population has increased since they were declared endangered in 1981, with a large number currently living in northern parts of Scotland.

Anyone discovering an abandoned pine marten, or any other wild animal, should immediately contact the Scottish SPCA.

Divers can venture further than seals during deep dives