Cabbies take kids for a ride

A PARADE of taxis decorated with balloons passed through Edinburgh yesterday as they made their way down to the coast.

The annual taxi trade children’s outing left Murrayfield stadium in spectacular style before driving through the city to visit the coastal trails at Musselburgh and Yellowcraigs.

This was the 63rd outing organised by the taxi driver’s of Edinburgh and it has become a much-loved tradition for the cabbies and their family.

Chloe Bell, 12, has grown up with the outing as her dad, Keith Bell, organises the trip.

She said: “I’ve been coming along with my dad since I was about eight. It’s always fun but sometimes it’s sad.

“Obviously some of them this is their last year here, they’re not very well and it’s sad when you don’t see them again.

“They’re not as lucky as us so it’s nice to give them something, to take them on a wee outing and take them out for the day. 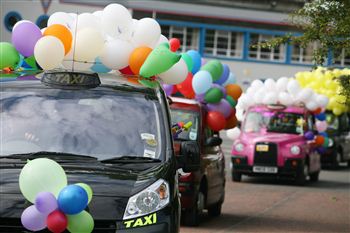 “Some of them have autism, some are in wheelchairs and others have cancer and other diseases.

“But they can forget about it for one day and have a day off school to go to the beach.”

And the parade had a special guest as MSP Kenny MacAskill jumped on to the party bus for a free lift down to the Scottish Parliament after judging the best-dressed taxi competition.

The MSP for Edinburgh East and Musselburgh was delighted to be able to help the outing.

He said: “The taxis are giving back to the community and it’s a credit to them. It is part of the event calendar of the City of Edinburgh.

“The taxi trade do a hard job and an exceptional job all year round and this is another example of them giving back to the community. I’m here supporting the taxi life.

“These kids all live with difficult circumstances and this trip makes their lives a wee bit better.”

But the minister was worried that he might get squirted on his way out of the bus and into Holyrood as the children were all armed with their traditional water pistols.

He said: “I will just need to run into the building before they squirt me – I have a cabinet meeting later so don’t want to be soaking wet.”

And the cabs were done up to the nines in an attempt to bag the best-dressed cab prize.

With two categories – one for balloon displays and one for cab fancy dress – there is a friendly rivalry between the drivers.

Kenny MacAskill and the cab inspector, Audrey Fry, decided that the Disney taxi was the most impressive.

With an array of popular characters adorning the outside and loud music pumping from the cab, it was certainly the most noticeable taxi on the streets.

Its driver – calling himself the Disney driver – said he likes to make an effort.

He said: “It’s good to make the kids smile.”

The parade made its way through Edinburgh down to Musselburgh stopping for ice cream before going on to Yellowcraigs for a picnic on the beach.