A SCOTS paramedic faces the boot after he refused to answer two emergency 999 calls.

However William Munro, from Glasgow, blamed stress of the job after being chased by a Samurai wielding patient and confronted by a knife wielding thug on two separate occasions. 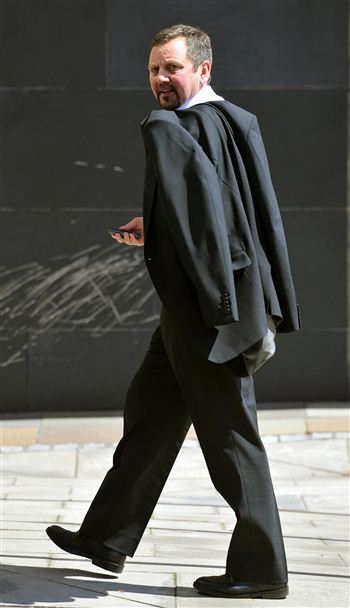 But a panel decided yesterday that was no excuse for his refusals to attend to the two emergencies involving pensioners, one of whom was suffering chest pain and the other breathing difficulties.

Mr Munro was working single-manned on April 24 2006 when he refused to attend to two elderly patients.

The first call involved an 82-year-old woman who was experiencing breathing difficulties.

The second involved a 70-year-old man with chest pains.

Munro blamed post traumatic stress disorder on his refusals after it emerged he had been confronted by two patients in the previous six months who were carrying weapons.

The Glaswegian worker appeared in person in front of a conduct and competence committee of the Health Professions Council in Edinburgh today.

Giving evidence to the three man panel, Munro denied that he had refused to attend the first call.

But admitted the second charge involving the male pensioner.

In both incidences urgent treatment to the patients was delayed by several crucial minutes as the despatch operators rushed to find suitable alternatives.

Problems arose when Mr Munro’s crew partner called in sick leaving him to operate the ambulance on his own.

Unaware of his situation the emergency despatch operators tried to get his vehicle to attend to the two calls.

Paramedics are required to respond single manned to an emergency call if there is no indication of violence or alcohol. The hearing was told both incidences met that criteria.

But Mr Munro claims he refused the calls because he was “anxious” about attending the calls on his own after being confronted by a mental health patient brandishing a knife, a hammer and a Samurai sword in Oct 2005.

And six months later he and his partner were challenged by another man carrying a knife.

Both paramedics at the time were forced to seek shelter in their ambulance and call police for assistance, he said.

He added: “In October 2005 my partner and I were attending to a patient and he was very agitated.

“I noticed he had something in his hand but luckily I managed to get the knife off him.

“He then jumped up and tried to grab a Samurai sword from under his chair.

“The second incident in April 2006 was when we attended a cardiac arrest call.

“I approached the patient and he pulled a knife on me.

“We both managed to get back into the ambulance and call for the police.

“Both left me very upset, anxious and agitated.

“I felt very anxious about working on my own and those emergency calls were the first I had been on my own since the knife incidents.

“I didn’t know how to react.

“Things were preying on my mind. I was acting irrationally and couldn’t communicate properly due to the stressful condition I was suffering from.”

The hearing had previously heard evidence from the two despatch operators who made the emergency calls from Mr Munro.

Both Francois Crawford and Kate Anderson had claimed Mr Munro had regularly questioned jobs handed out to him.

Miss Anderson was accused of “victimising” Mr Munro and said they had a “difficult professional relationship”.

Mr Munro was initially suspended and then sacked from the Scottish Ambulance Service following a written complaint by Miss Anderson.

He was reinstated as an ambulance technician on appeal.

The HPC panel found the charges against Mr Munro proven and will decide on his competence and the appropriate sanctions at a later date.

They said: “We heard evidence from Francois Crawford and Kate Anderson and found both to be credible witnesses.

“We also heard evidence directly from the registrant.

“The panel is therefore satisfied that the charges have been proved on the balance of probability.”

The hearing will resume at a later date.