Cheeky Lorraine gets knickers in a twist 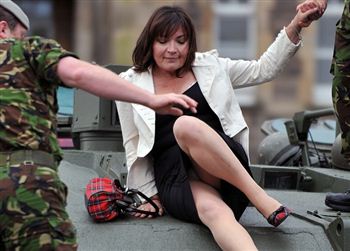 Strutting her stuff in tartan high heels and a short black skirt, the saucy Scots TV star flashed her knickers while clambering on top of a Challenger II tank.

She perked up the Redford Barracks troops with her early morning briefing, before telling them: “I think you boys are all absolutely gorgeous.”

The 49-year-old yummy mummy has been deployed as the secret weapon at the frontline of the launch of the first ever UK Armed Forces Day.
She got a ride in the country’s biggest tank, but not before accidentally flashing the flesh for heroes from all of Scotland’s forces.

Like a white flag on a battlefield, every squaddie in sight was stunned to catch a cheeky peek of Loraine’s underwear.

Even top brass army commanders, sergeants and corporals were all queuing up to give Lorraine a hand as she scrambled down from the massive tank.

She was given the Royal treatment as one soldier held her tartan handbag, another held her hand and other troopers propped up a mini staircase to help her down. 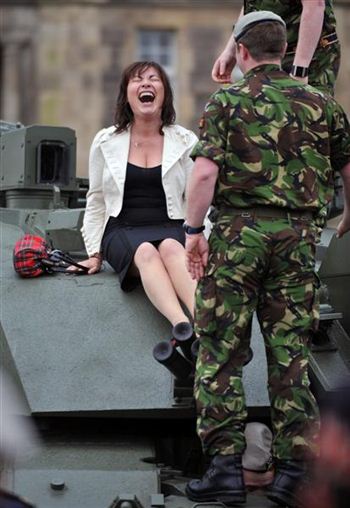 One young airman from RAF Falcons said: “The boys have been begging to be involved in Lorraine’s visit in some shape or form.

“Seeing her flash was fantastic, every man’s dream. You could tell she found the whole thing hysterical. Moments like that stay with you when you’re miles from home on service.

“She’s a real trooper herself for getting so involved, but someone should have told her not to wear high heels if she was getting in a Challenger.”

The GMTV presenter got up close and personal with Army, Navy and RAF personnel at the Edinburgh base to launch the June 27 day of celebration.

But she couldn’t help herself from making a flushed admission that she had the hots for the military men of the RAF Falcon display team.

Back on dry land, Lorraine gushed: “That was an experience I’ll never forget.

“These guys are proof that to be in the Forces you not only have to be clever, athletic and talented, but also stunningly good looking.

“It’s just the way it is; they are all just so hot. The boys are gorgeous, I can’t get over it and I can’t wait to come back sometime.”

After her ride around the Barracks, the East Kilbride-born star revealed she was “awe-struck” at the power of the tank.

She added: “Forget all your fast fancy cars or motorbikes, the tank is the way to travel in style.

“I’ve done plenty of amazing things in my life but that’s right up there simply for the sheer power of the thing.

“I was awe-struck at the noise, the speed and the strength of the thing, it’s something else. 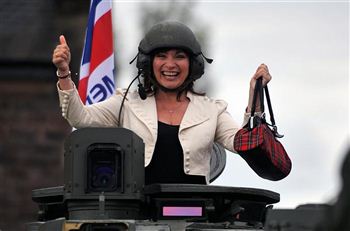 “Armed Forces Day is a great opportunity to get up close and personal with the amazing men, women and machinery that make it all happen.

“I hope people can cast politics aside and simply say thanks in person to the people who serve for us.”

She launched the full programme of events for Armed Forces Day, with celebrations planned nationwide to recognise the brave service of personnel past and present.

But Brigadier David Allfrey was keen to point out that it wouldn’t be as subdued as Armistice Day.

He said: “This should be seen as distinctly different from November 11, which is a hugely important day of reflection and remembrance of those who have fallen.

“Armed Forces Day on the other hand should be full of fun, pride and spectacle.”