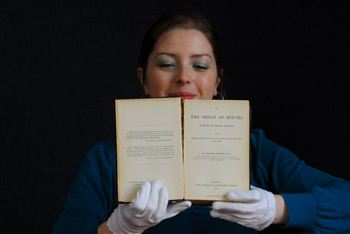 A RARE first edition of Charles Darwin’s greatest work The Origin of Species’ sold for an impressive £15,000 at an auction yesterday.

It has been described as “one of the most important books ever published” and was sold to a private buyer from the south of England.

The price reflects not only the importance of the book itself, but also the rarity of the first editions.

And the sellers came across the book by chance – finding it in their family house near Inverness.

In recognition of the celebrated scientist’s pre-eminence, he was one of only five 19th-century UK non-royal personages to be honoured by a state funeral and is buried in Westminster Abbey.