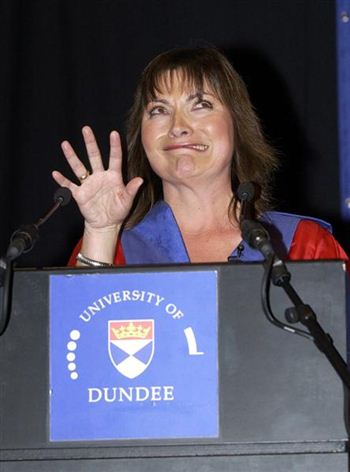 FOOTBALL daft telly star Lorraine Kelly says she’s terrified over the prospect of Setanta Sports going bust – because she won’t be able to watch her beloved Dundee United while filming in London.

The 49-year-old Arabs fan she is a subscriber to the beleaguered station like many of other Scots working away from home, and will be “devastated” if the channel has the plug pulled on it.

And she’s waiting anxiously to find out if the stricken subscription-only channel will plunge the league into limbo, fearing a blackout will leave the Tannadice club crippled for transfer cash.

She said: “I just hope they can find a buyer because a lot of clubs will be feeling it because it’s an awful lot of money that they owe.

“For a lot of clubs in the SPL the money from Setanta is basically paying the wages, so that is going to be a difficult thing for all clubs right the way from the top of the league to the bottom.”

She says that in between filming GMTV in London, she loves nothing better than to  tune into the station to catch her “beloved” DUFC playing in the Scottish Premier League back home.

But with Setanta staring into a £25million black hole of debt owed to clubs, she fears Scottish football as we know it is destined for disaster.

In what Lorraine described as “a desperate situation”, most clubs rely on the TV channel’s cash as a vital supply to fund the ever-rising footballers’ salaries, with at least three thought to be on the brink.

She added: “From the point of view of a fan I really hope they can get something sorted out or somebody can take it over.

“I love having Setanta because if for whatever reason I’m away from home and I can’t get to a game, it’s great to be able to watch it on the telly.

“I’m a subscriber and I’m wondering what’s going to happen like everybody else, it’s very worrying times indeed.

“It’s a desperate situation but it’s the way the SPL is these days that money is key to its future.”

She added: “I’m very worried about how it will impact not only my beloved Dundee United, but I think it’s going to affect all of the clubs in Scotland.

The Tannadice squad’s chairman Steven Thompson is among club bosses leading discussions within the SPL to negotiate with Setanta.