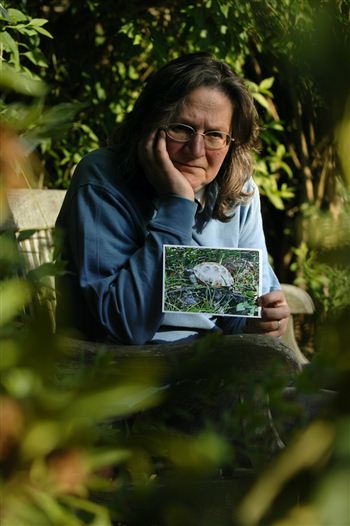 A WORRIED pet owner is hunting for her missing anorexic tortoise after it made a slow bolt for freedom six weeks ago.

The fussy eater managed to squeeze under a garden gate and make his bid for freedom at the beginning of May.

Measuring a miniscule six inches Alfie has lived with Mrs Agnew, 57, for the past 18 years and has never been able to hibernate because of his anoxeria.

Last year, after a spell at the city’s Dick Vet hospital, Mrs Agnew was forced to feed Alfie with baby food through a tube just to keep him alive.

And recently the animal lover has been encouraging her poorly pet to eat by putting him under a heat lamp and giving him warm baths.

Mrs Agnew is concerned that even if Alfie has been found, his new owners will struggle to get him to eat.

She said: “We put him out in the garden and we’ve just got a new garden gate. It must be that slight bit higher than the last one and we think he squeezed underneath.”

Mrs Agnew also revealed Alfie has made a dash for freedom before – after climbing a six-foot ivy-covered wall and dropping to the other side.

Unfortunately, Alfie was found to have a broken leg when he was eventually tracked down in a next door neighbour’s garden.

Mrs Agnew added: “I’ve always had a thing about tortoises because my father and my uncle had them – my grandfather had brought them home from Burma, where he served with the army in the 1920s.

“So when my family saw Alfie in a pet shop they thought ‘We’ve got to get that for mum’.”

Although anoxeria may sound like an unlikely diagnosis for a tortoise, it is not exactly the same as the human version.

“One of the main things that makes tortoises anoxeric is that they’re ill, but equally their metabolic rate is governed by temperature and if they’re kept too cold they won’t eat.”

Mrs Agnew is offering a cash reward for the safe return of Alfie and can be contacted on [email protected].