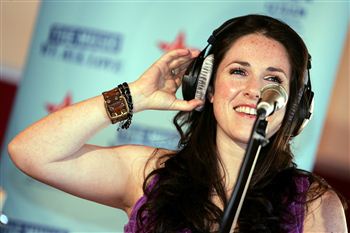 HAVING claimed to be a “punk rocker” in her debut pop song, Scot songstress Sandi Thom has finally proven herself as a bit of a rebel.

The Banff singer has launched a filth-ridden tirade on her local newspaper’s music critic for having a dig at her dulcet tones.

She was tipped over the edge by Aberdeen music reviewer Andrew Learmonth, who said he hated her “awful” music.

So in response, Thom penned, recorded and uploaded the expletive-packed song for fans to download for free from her website.
The country-style clip, complete with Thom’s customary faux-American accent, includes the lines: “This song ain’t pretty, in fact it’s pretty sh***y, but if you don’t like it f*** you.

Yesterday, subject of the song Learmonth said: “It’s one of the best songs she’s ever written.”

He landed himself in Thom’s bad books after publishing details of the one time the pair met in a supermarket.

He said: “In my column I was incredibly nasty and may have said that Sandi Thom was responsible for killing Myspace and music.

“She gave me a wee smile as we passed each other in the bakery aisle.

“I felt like a complete hypocrite. I had been nasty about this person who was nice and friendly.

“I went home and dug out my copy of her latest album. Perhaps, I thought, I need to give her another chance.

“I listened, and it was awful. Sorry, but it really was.

“I feel like a horrible person but as nice as she was in Asda I don’t think I can ever get over my hatred of her music.”

She said: I came across an article published in February by some dude called Learmonth who rubbishes me in the title and proceeds to waffle on about a few new bands he’s seen at the Tunnels, a venue in Aberdeen, and his now cancelled radio show being a beacon of musical prophecy.

“Not until the very end of his column does he actually attend to topic by rubbishing me and my music some more but never really answering the question of the title which was “my problem with Sandi Thom” and provides no convincing link to what’s previously been written.

“So, I decided to compile a little response to Learmonth in the form of a musical ditty… and while I’m at it this one goes out to all the journalists that use me as a s*** shoe shiner and think my music sucks.

“Next time you’re looking for a hook for your drivel mate, take a cheap shot at someone else.”

A disclaimer accompanies the song, stating that listeners may find the lyrics offensive.

Yesterday Learmonth, 28, said: “It is a bit of an over-reaction but I think it is one of the best songs she has written.

“She is someone who deliberately goes out to get as much press attention as possible, and if you want to do that, there will be some people who might say that you are not actually doing very much.

“I think Sandi hasn’t quite realised that.

After blasting to the top of the charts in 2006 with “I Wish I Was a Punk Rocker”, the internet sensation flopped and her most recent album, The Pink and the Lily, was mauled by critics.