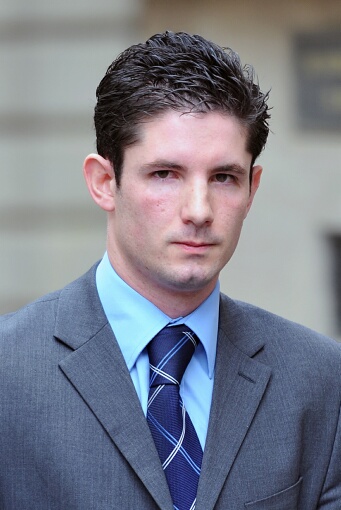 Former Scots Guard soldier Andre Dunn, 27, was turned in to cops by his own bride-to-be after she walked in on him stashing over 1,100 indecent pictures of children.

But after admitting the stash was his he claimed he WANTED her to catch him with the images because she had been abusive to him.

And at Edinburgh Sheriff Court Dunn – who served in the Scots Guards regiment for three years and guarded royalty as part of his duties – escaped a jail sentence and was given a three year probation order.

He was also placed on the sex offenders register for three years after he had earlier admitted possession of 1,109 indecent images of children, he also had 32 movies featuring child abuse.

But Dunn’s solicitor, Jim Stephenson, said Dunn had told social workers that he had used the sickening stash to force the woman he was to marry to ditch him.

Mr Stephenson said: “He got himself in an abusive relationship and he hoped that she would discover this and it would get him out of the relationship.”

However, Mr Stephenson said, Dunn admitted the pictures were for his “personal use”.

He said: “There is no question of him distributing or making the images available on the internet – it was for his personal use.”

Mr Stephenson said Dunn had had a “good working record” and this was his first offence.

Since his vile interest came to light he has lost his job at a bank and has had to leave his home.

He said: “If you did not know already now you have found out that the public, friends and your employers take a very dim view of offences such as these.

“I’m sure you appreciated that to get hold of images like that children had to be abused.”

Fiscal depute Aidan Higgins had earlier told the court how the 24-year-old woman walked in on Dunn at the home they shared in Mayfield, Dalkeith last April.

Mr Higgins said: “Dunn’s fiancée returned home one evening and found what she thought to be a suspicious situation with the accused trying to hide something in a wardrobe.

“She then demanded to see what he had been looking at. She saw one image of what appeared to be a very young girl kneeling on a bed in a sexual pose.”

Mr Higgins said the devastated bride to be became “very upset” at the revelation but selfish Dunn merely asked her if she was going to tell police.

The woman managed to take the memory card and laptop and gave them to officers at St Leonards Police station in Edinburgh.

A forensic examination of the computer equipment showed a total of 1,109 indecent images of children – 60 of those were at the second highest level of depravity on the police scale.

Officers also found 32 movies featuring sexual abuse of children. Dunn was charged and admitted the stash was his.

But, Sheriff Crowe said, because it was Dunn’s first offence and he admitted his guilt at an early stage he was able to avoid a jail sentence.

He sentenced Dunn to three years probation and ordered him to sign on to the sex offenders register for three years.

People “wait at least a month to report child abuse”