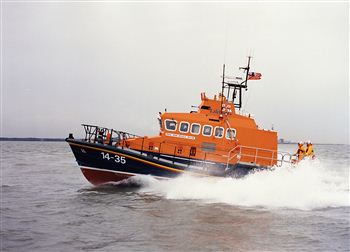 A BODY washed up on a Scots beach is feared to be that of a 60-year-old angler who went missing six weeks ago.

The gruesome find was made by a man walking his dog on Belhaven beach, Dunbar, yesterday (Tuesday) afternoon around 4pm.

The human remains were recovered by the local Lifeboat crew, before police moved in to begin their investigation.

An RAF Boulmer helicopter and two Forth Coastguard lifeboats launched an extensive search for a missing Edinburgh-based angler on May 13 after he failed to return home.

They received a 999 call from a member of the public reporting that a pile of clothes, mobile phone, bag and shoes had been found on rocks at Dunbar Harbour, along with a floating fishing rod.
Subsequent investigation established that the owner of the gear had not returned home as expected at 6pm.

A source close to the investigation said: “It’s the same crew who looked for him that have ultimately brought him to shore.

“It was a full scale search back in May, with a helicopter scrambled and lifeboats out looking until it became too dark.

“This will no doubt be a terrible time for the poor man’s family, but hopefully it brings them closure.”

Investigations to confirm the man’s identity were continuing last night.