John Krasinski, already famous for his role in the American Office, plays the lead part in the film and said that he was delighted to be in Scotland for the launch of the festival.

He said: “Scotland is gorgeous – I’m definitely not in Kansas anymore.

“It’s a completely different place to the United States, it’s so beautiful and I’ve always wanted to come here.

“When I found out I was going to be here I was like ‘yes!’ so I could secretly enjoy seeing Edinburgh.

Crowds of photographers and film-lovers gathered to catch a glimpse of the parade of celebrities outside Edinburgh’s Cineworld theatre in Fountainbridge.

Joining Sir Sean and Sir Alan were the likes of Irish funnyman Dylan Moran and Frank Langella, fresh from a number of acting plaudits himself for his role in “Frost/Nixon”. 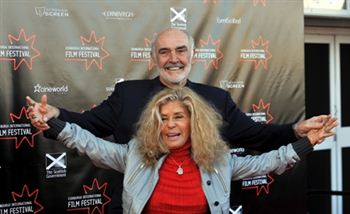 Sir Sean, joined by his French painter wife Micheline Roquebrune, waved graciously at fans while posing for pictures, donning a Scottish flag pin on his lapel for the occasion.

“Away We Go”, the fifth film from British director Mendes, has received rave reviews from critics, and Krasinski said the Edinburgh was the perfect place to premiere the film.

He said: “Being in Edinburgh for a movie like this with a director like Sam Mendes is incredible.”

“Edinburgh is a film festival for film lovers, and while at a lot of festivals the movies seem to get shuffled into the wayside, this seems like a festival for people who appreciate movies – hopefully they’ll appreciate this one!”

The Hoff Checks In to Edinburgh