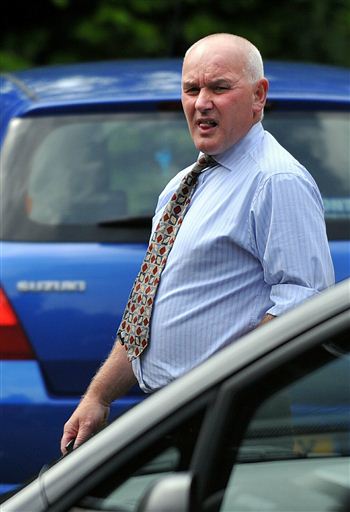 A THUG teacher had to be dragged off a pupil after launching himself at the stunned schoolboy in class, punching him several times in face.

Shamed Archibald Paterson, 56, repeatedly struck the fourth year student in the face and body after a row between the pair.

A GTC panel was told Paterson, who had an unblemished 23-year professional record before the incidents in 2007, was taking a fourth year class when he became involved in a war of words with a pupil.

Ordering the rowdy pupil into the corridor Paterson then launched an array of violent blows on the schoolboy.

A full-blown fight then ensued as the boy fended off the attack by striking back.

Two fellow teachers witnessed the sickening assault, with one colleague being forced to pull Paterson away from the boy.

The Computing and Technical teacher was working at Larkhall Academy, Larkhall, when the incident happened in February 2007.

He was immediately hauled in front of the school’s disciplinary board and handed a final written warning.

A hearing of the General Teaching Council Scotland in Edinburgh heard evidence from the school’s Deputy Head, Mr John Lundy, who said he “heard loud voices in the corridor, and then heard a loud thump”.

He then tried to get in between the pair but Paterson “kept on hitting him”.

Giving evidence to the panel in his defence, Paterson revealed he was wary of the pupil.

He said: “The boy himself could be very violent and aggressive. I was on my guard that day.

“I had a stormy relationship with the boy as he was always aggressive and in your face.

“Unfortunately, I’m not the type to back down.

“He had been removed from my class before, but may I add he was a very clever pupil.

“I now realise I was under a great deal of stress at the time and I should have turned away and asked for help.

“I accept a teacher should not act in that manner.”

However it emerge during the hearing that the attack on the boy was not the only reason for his dismissal.

In November 2007 Paterson was sacked from his position at the school after he launched a horrific verbal assault on Ms Paula Johnstone, a fellow teaching colleague.

Paterson exploded with rage after being challenged by the teacher about him letting a pupil use a computer station normally reserved for teachers.

The tirade left his colleague trembling in fear and she was forced to retreat to her classroom where she burst into tears due to the stress.

The teacher then approached Paterson to explain her situation to him and offer an apology but the thuggish teacher rounded on her again.

Ms Johnstone was so traumatised by the verbal attack she was unable to drive home that evening and was forced to go home the following day because she could not cope with the situation.

Again, two teachers witnessed the barrage of abuse with one saying “the tirade continued even as she was apologising”.

Paterson said: “Ms Johnstone was a very cold person who kept herself to herself. She didn’t speak to anyone and very rarely came into the staff room.

“She had no right to interfere in what I was doing and I let her know I wasn’t happy with her.

“I admit I did shout at her abusively.

“Two months before the first incident my sister died of cancer, and I was also going through a change of life at the time.

“That all contributed to my actions.”

And after the sickening verbal assault on the quietly-spoken female colleague in November of the same year, Paterson was sacked from his position at the school.

The shamed teacher appeared in person and admitted the two charges in front of a six-man conduct and competence committee of the General Teaching Council on Tuesday.

In striking Paterson from the teaching register the panel stated: “It was clear from the narrative provided by the council’s solicitor that the respondent had provoked the pupil.

“It was also clear to the sub-committee that when the situation escalated to one involving violence, the respondent did not remove himself from the vicinity of the pupil and the incident, or seek assistance from colleagues.

“To the contrary, the respondent engaged with the pupil and struck him several times.

“Regardless of any provocation that the pupil may have displayed, it was wholly unacceptable for the respondent to have struck the pupil.

“Accordingly, in all the circumstances, the sub-committee had no hesitation in unanimously holding that the respondent’s conduct fell short of that expected of a teacher.

“They considered that they had no option but to direct that his name be removed from the register.”

The GTC panel also stated Paterson will be referred to the Scottish Ministers for consideration in connection with the inclusion on the list of those disqualified from working with children.