Oasis stars cooking up a storm 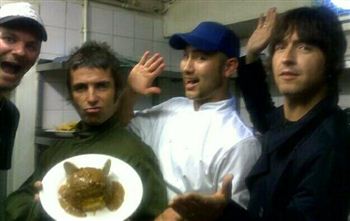 BRIT-POP rockers Oasis spent the day before their sell-out Edinburgh gig finding out how to cook a HAGGIS.

Members of the world-famous band were spotted drinking in an exclusive capital bar for around seven hours on Tuesday before heading into the kitchens to see the Scottish culinary delicacy being served up.

And frontman Liam Gallacher was so impressed with the service he left the staff a fantastic tip – four VIP tickets for the Murrayfield concert.

The band had sat drinking in pub ‘Whiski’ for about two hours before being recognised, but the bar’s owner says the controversial rockers behaved impeccably.

Led by Liam, the Oasis entourage persuaded the bar’s management to let them into the kitchens to watch the chefs prepare Scotland’s national dish for the very first time.

Owner Gary Still said: “They came in at about three o’clock but we didn’t even realise it was them until about five, when one of the workers recognised them.

“They just seemed like ordinary guys in having a few drinks.

“They were all extremely pleasant, and dealt with the autograph hunters and people wanting photographs very well. We’ve had bands in before, but these guys were the most famous yet.”

The 12-strong group, including Liam, guitarist Gem Archer and array of sound engineers and other crew, shunned the city’s trendy bars to settle for the small whisky bar on the Royal Mile.

And as rumours of the band’s appearance at the bar spread more and more fans tried to cram in through the doors.

Mr Still added: “They left a nice tip, although I’m not sure exactly how much, and drank mostly beer, though I’m sure they tried some of our whiskies as well.

“It’s great for us that someone as popular as this should stay with us in the bar. Some had approached asking where they would go next and they replied they would stay in Whiski because they thought it was ‘cool’.

“They went down to the kitchen as well because they’d never seen a haggis before, so we cooked one for them so they could see for themselves how it was all done.

“We did generally leave them alone, and although a lot of people came up to speak to them they were generally left in peace.”

The multi-award winning group played to a sell-out crowd at Murrayfield Stadium the following evening.