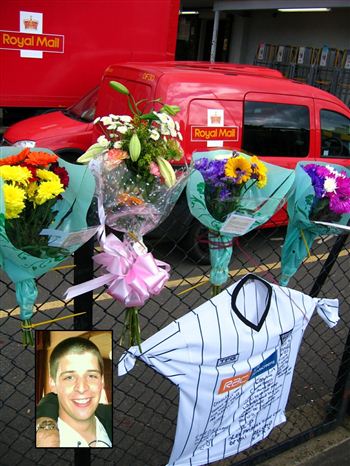 TRIBUTES have been pouring in from residents mourning the loss of their beloved local POSTIE – days after he plunged to his death off a Scots mountain.

A carpet of flowers, cards and football strips of his favourite club Dunfermline have been laid at local sorting office in Fife from devastated locals.

And his colleagues are planning to wear full Royal Mail uniforms in an emotional ‘Last Post’ tribute for his forthcoming funeral.

His Bebo page has been inundated with tributes since, reading: “I can’t believe I won’t see you driving the little red post van.”

Another says: “So sad you’re not going to be coming in most mornings with our Mail and your lovely bright smile.”

He was even described as “the best postie in the world” by those he delivered letters to.

The lifelong Pars fan fell to his death while crossing the notorious Aonach Eagach ridge.

As news of the tragedy filtered through the Fife sorting office he worked from has been swamped with letters and tributes.

His Bebo internet page has been filled with messages from devastated locals whose letterboxes he filled with cheer each day.

She said: “My wee boy would wait at the window for him to deliver the post then run out the front door when he arrived.

“Then David would hand him the post and give Matty a high-five and it made him feel like the bee’s knees.

“How am I going to tell him that his hero is never going to come back?

“I’m welling up myself; he was just the best postie in the world.

“I have been wondering where he was the last days and it’s so tragic to hear he’s died.

“It’s awful because he was really young and just so kind.”

David was approaching nine years of service with Royal Mail, delivering to homes and businesses in the coastal town of Inverkeithing.

Among those paying tribute on his Bebo page was Karin Murray, who said: “Still in shock about what has happened.

“Can’t believe I won’t be getting cheeky texts off you anymore or won’t see you driving the little red post van.

Another neighbour, Debbie Wright, said: “Funniest guy ever. Will miss your banter and delivering my mail, never be forgotten. RIP love.”

One of his closest workmates, Brian Bailey, 45, gave a tearful tribute at the Dunfermline sorting office yesterday.

As a favour, David worked two hours overtime in what would be his final shift to cover for a younger colleague.

Brian said: “That was him in a nutshell. Being a postie was a job made for him. He loved it and never complained, always going that bit further out of the goodness of his heart.

“He was one of a kind, vibrant, boisterous and did anything to help others.

“He asked me on Friday where would be a good place to camp up at Glencoe. I gave him some advice and said have a great time, see you Tuesday”.

“Sadly that was the last time we saw him and it’s absolutely devastated everyone working here. There are plenty of broken hearts, especially among the girls.

“We’ll all wear our uniforms at the funeral as a mark of respect to what he brought to the Royal Mail.

“I’m very proud to have known him for his whole career here.”

She said: “He was always either smiling, laughing or singing when he set out on his rounds and that made him everyone’s favourite postie.

“He delivered letters to my mum and called her “Old Sandra” to wind her up because he knew she had just become a pensioner.

“Sometimes he’d ping elastic bands up at my window then ask me to chuck sweets out for him; he was so cheeky like that.”

He and his wife Edna returned home from a holiday in Las Vegas after receiving the crushing news.

“He played fives with his friends, he ran for Pitreavie Athletics Club, he liked climbing and the latest thing he was taking up was cycling.

“It’s just hard to take this in. We knew something was wrong when he didn’t get back to us and we heard the news in a phone call that night.”

His shattered mum Edna added: “He was always happy and contented, very popular and nobody had a bad word to say about him.

“He always had a football top on and so if people want to wear their Pars tops at the funeral thats fine.

“The funeral will take place at Dunfermline Crematorium on Tuesday”.