Proclaimers have faces painted on bra for charity 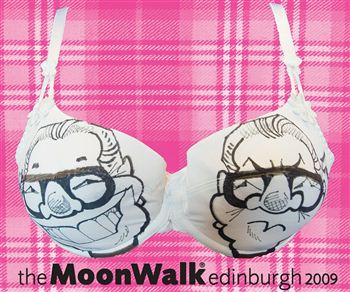 SCOTLAND’S most famous twins are helping to raise cash for a charity – by having their faces portrayed on a bra.

The 500 Miles stars have given their full backing to this year’s 26-mile Moon Walk marathon and have even prepared a special video message for all the participants to be screened just before the start of the event.

The Hibs-daft musicians, Charlie and Craig Reid, have had their caricatures drawn onto both cups of the bra by cartoonist Malky McCormick.

The garment will now be sold off at a charity auction after the night walk in aid of breast cancer.

The walk will have special resonance for Malky after the cartoonist’s wife, Ann, being forced to endure a mastectomy after contracting the killer disease four years ago.

Charlie, 47, said: “We could never say no to helping a charity like this. Every family has been touched by cancer, so we were only happy to do something.

“Even though Malky has drawn us as caricatures we are flattered by out portrayal – we have seen the drawings he has done of other people!”

The Auchtermuchty duo are disappointed at not being able to compete in this year’s event as they are currently promoting their new album in London.

Charlie added: “It’s a shame we can’t do the walk. I am very interested in doing it in the future – possible next year.”

The Moon Walk marathon is a worldwide phenomenon and the Edinburgh walk is the fourth year running Scotland has held the event.

Over 10,000 women and men are expected to take to the capital’s streets in brightly coloured decorated bras.

And the charity say they are hoping to top the amazing £2.7 million raised by last year’s event.

Malky’s wife Ann, 57, is making a special appearance at this year’s event after suffering from the cancer.

She said: “I know Malky would have done the bra even if I hadn’t experienced breast cancer, but that is a poignant part of it.

“I think it’s fabulous, and it was so funny when he was making it. Because it is such a fiddly thing to draw on he had to put two drinking cups in the bra cups.

“It was sitting in his studio and I am sure people would go up, spot it, and think ‘What the hell? Who is this strange man?’

“My daughter Jane is making my bra and I’m sure she’ll go over the top on the decorations.”

Sally Orr, spokesperson for Walk the Walk, said the bra will make a fantastic addition to the charity auction.

She said: “It is great to see two prominent Scottish talents get together to help us fight breast cancer.”