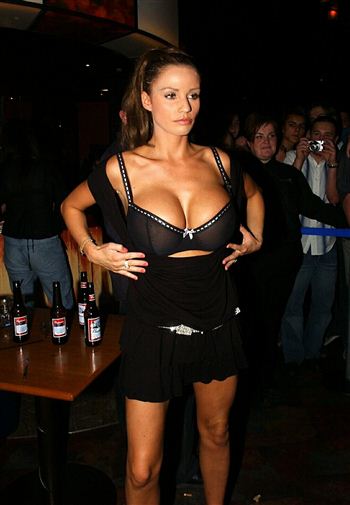 LOVE-SPLIT model Katie Price looks to be going into meltdown after putting on a seedy strip routine for onlookers on holiday.

But she has pulled the same kind of stunt before during troubled times in her life.

Six years ago – before finding a degree of apparent normality with Aussie hubbie Peter Andre – she was best known simply as Jordan and her life was a tabloid car crash.

During one trip to Edinburgh to open a nightclub in 1993 she got drunk and performed a similar sleazy routine, even simulating a sex act with a beer bottle in front of stunned onlookers.

Her sleazy antics that evening mirrors her apparent recent breakdown as she struggles to work her way through her acrimonious marriage split with Andre.

These pictures show the scantily-clad model cavorting with clubbers as she opened a student night at the Mood nightclub in Edinburgh when she declared herself single after splitting from on-off boyfriend Dwight Yorke.

The highlight of the evening was a booze-filled strip by Edinburgh punters desperate to impress the busty celeb.

And pictures taken of the mum-of-three this week in Ibiza show Price up to her old tricks as she was seen flashing her knickers and dancing semi-naked on tables during a 12-hour bender.

The former Page 3 girl was seen flirting with ex-boyfriend Matt Peacock before stunning onlookers by hitching up her dress to expose her white bra and thong.

The 31-year-old glamour pin-up is on the island for a calendar photo-shoot and to begin filming her first reality TV show since splitting from Andre.

Price and Andre met while appearing on reality show I’m a Celebrity…Get Me Out of Here! in 2004.

The celebrity couple have had two children together, Junior, four, and Princess Tiaamii, one, and were married in a star-studded bash in September 2005.

Price had her first child, Harvey, seven, in 2002 while dating Trinidadian footballer Yorke.