A THUG who bit off part of a man’s ear because he bumped into him in a queue at a petrol station has been ordered to pay £2000 compensation to his victim. 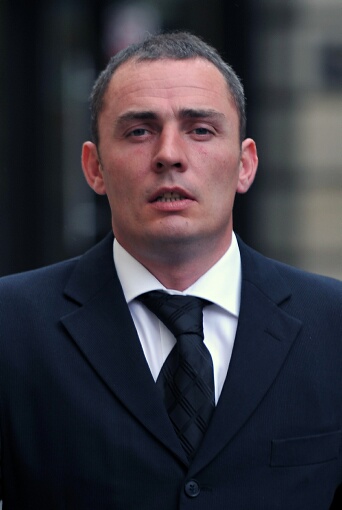 Farm worker, Christopher Deans, 24, was on his way to work and had stopped to buy cigarettes when he nudged Wayne Morrison at a service station.

The 35-year-old followed the young man out of the shop and head-butted him before chewing his ear off.

Mr Dean’s severed lobe was packed in ice lollies from the store but despite emergency treatment plastic surgeons were unable to re-attach it.

The vicious thug – who blamed a bust-up with his partner for the attack – calmly rejoined the queue and paid for his petrol before driving off.

Police used the licence plate of Morrison’s car to track him down and when they interviewed him he admitted “overreacting”.

But at Edinburgh Sheriff Court the father-of-five escaped a jail sentence despite admitting assaulting Mr Deans to his permanent disfigurement.

Instead he will do unpaid work and pay Mr Deans £2,000 in compensation.

Fiscal depute Aidan Higgins told the court how Mr Deans had stopped at the station in Haddington, East Lothian, at around 7.20 am on August 8 last year.

Mr Higgins said: “The complainer went into the service station on his way to work to buy some cigarettes. When he went to pay for them he found he was a little short of the necessary money and he headed out to his car to get the few pence more he needed.

“On making his way out of the shop he had to make his way past a rather tight space where a queue was forming and on leaving he brushed against the accused who was in the queue.”

Mr Higgins said that although Mr Deans had nudged into Morrison it had only been a slight contact and he thought no more of it.

He said: “It was a very slight contact and he did not think it necessary to mention or apologise to the accused.”

However it was enough to send Morrison into a sickening rage and he chased Mr Deans out of the shop.

Mr Higgins said: “On leaving the shop he found that the accused had followed him to the door. He grabbed hold of the complainer and pushed him against the door and head-butted him in the middle of the forehead.

“Having a hold of Mr Deans he then bit into his left ear. Mr Deans reported to police that it was his estimate that that lasted between five and 10 seconds.”

Mr Higgins said: “During this time Mr Deans was screaming – he was in considerable pain. A number of others in the shop realised what was happening and went to the aid of Mr Deans and tried to pull Morrison off him.”

Mr Deans was rushed to the back shop of the service station while Morrison calmly rejoined the queue in order to pay for his petrol.

Mr Higgins said: “The complainer was shown into the back-shop and the accused went back into the queue where he calmly waited to settle his own account.”

Morrison then got into his car and drove off.

Meanwhile the chewed-off piece of Mr Deans’ ear was found lying on the floor of the service station and quick-thinking staff packed it in ice-lollies before calling an ambulance for Mr Deans.

Mr Higgins said: “That piece of cartilage was recovered and packed in ice-lollies. The complainer was taken by ambulance to Edinburgh Royal Infirmary and from there transferred to St Johns Hospital in Livingston.”

Plastic surgeons desperately tried to re-attach the ear but were unable to do so and Mr Deans will be missing it for the rest of his life.

Mr Higgins said: “It is a source of considerable embarrassment. As someone who spends much of his life outdoors he experiences significant pain when he is working in cold weather.”

Police went to see Morrison at his Cockburnspath home, in Eaat Lothian, where his partner told them he had left the home in a “raging temper” following an argument.

Mr Higgins said: “She reported to police that the accused had left the address that morning in a raging temper after a domestic quarrel.”

He said he had “overreacted” because of the argument with his partner and recent money troubles.

His solicitor, Vincent Belmonte, said his client was a prominent member of his own community who volunteered for a children’s cancer charity in his spare-time.

Mr Belmonte said: “The incident before the court is out of character for Mr Morrison.

“His step-father had died about a year-and-a-half before this and he tells me since this his personality had never been the same and he was suffering from depression.”

Mr Belmonte said Morrison had since seen his doctor to get anger management and added that the wall-fixer could pay compensation.

He said: “Your behaviour was disgraceful. All you needed to say was something like excuse me but at that time in the morning to react in that way is outrageous behaviour.

“You have disfigured the man and Mr Deans has got to live with that for the rest of his life.”

Sheriff Crowe said it would be “very easy” to send Morrison to jail but said it could have a “devastating” effect on his family.

Sheriff Crowe warned Morrison, of Toll View, Cockburnspath, that if he did not comply with the compensation or unpaid work he could be jailed.