A WOMAN suffered a stroke after a police driver ploughed into her as he made his way to work. 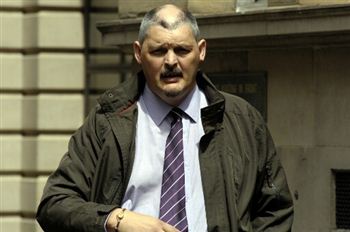 Nicola Sloan, 38, was also on her way to work when Alasdair Sharp was driving the police custody van and smashed into her.

The 43-year-old had crossed over into oncoming traffic and collided with Miss Sloan’s Toyota Yaris.

Firefighters had to cut Miss Sloan out of the wreck and both her arm and leg were broken in the crash in Holyrood Park in Edinburgh last November.

And later at hospital she suffered a stroke following the incident.

Sharp is still working for Lothian and Borders Police but has voluntarily stopped his driving duties since the smash – he has also been referred to the Police Complaints Commission.

Fiscal depute Mhairi Vernon told the court how Miss Sloan had been driving her car on the Low Road at Holyrood Park at around 6.30pm.

Miss Vernon said: “The accused was working as a custody officer at St Leonards Police Station and he had to collect two custodies. He was driving a Volkswagen made van and it was dark.

“There is a double bend at the site of the crash. When the accused reached the bend he crossed over into the other carriageway. The accused’s van slid towards Miss Sloan’s vehicle and she was unable to take evasive action.

“She was very seriously injured.”

A crash investigation was launched and it found that while Sharp had not been speeding, he was going too fast for the conditions and road layout.

Miss Vernon said the investigation’s findings were that driver error on his part had caused the collision.

Sharp’s solicitor, Kenneth Cloggie, said his client had immediately raised the call for help and explained how it had happened.

Mr Cloggie said Sharp had been a traffic warden for years before gaining his passenger licence and becoming a police custody officer in 2003.

He added that Sharp had been on his way to work early to relieve a police officer who was guarding a prisoner and made “a simple mistake”.

Mr Cloggie said: “It is recognised that this is a sharp bend. After the accident he immediately radioed in for assistance using a police radio.

“He was breathalysed and it showed zero.

“He said as he tried to turn the left hand bend the steering became very light and he believed it to be under-steer.”

Mr Cloggie said it was the type of mistake many drivers had made and it had been “sheer bad luck” that Miss Sloan had been coming in the opposite direction.

The consequences of the accident, Mr Cloggie said, had been disproportionate to the mistake.

He said: “He falls to be sentenced on a small mistake when he was driving in the early hours, when he was sober in the course of his employment and he was not breaking the speed limit.”

Sheriff Elizabeth Jarvie QC deferred sentence until next month for a report on Miss Sloan’s health. Sheriff Jarvie said she also wanted to know what, if any, civil compensation claims had been made.

Sheriff Jarvie deferred sentence and Sharp – whose address was given as Lothian and Borders Police – was ordained to appear in July.

Falcon found in Scotland after frantic flight from England