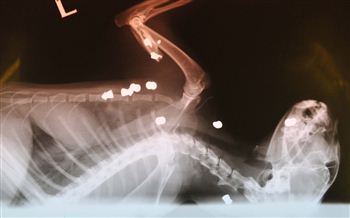 A HELPLESS young cat was pinned down and brutally shot 11 times by yobs – and survived.

It was the first time nine-month-old Willow had ever ventured out of his owners’ garden near Edinburgh.

But the terrified family tabby was dragged seven miles from his home and peppered with metal pellets.

Heartless thugs shot him from such close range that they shattered bones in two of his legs.

Vets said he was lucky to survive, as one of the pellets was lodged just three centimetres from his brain.
Willow’s heartbroken owners were “shocked and tearful” when their cat was found curled up on a roadside whimpering for help on Tuesday afternoon. 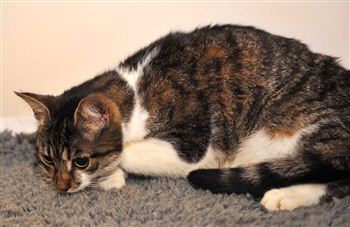 Vets at Lamond Veterinary Clinic in Livingston operated on the timid tabby yesterday (Friday) and called for the culprits to be jailed.

Harry Haworth, a qualified vet of 30 years, said the shooting was “one of the worst acts of cruelty I have ever encountered.”

He said: “There’s no way that Willow could have walked so far from home in Gilmerton all the way to Penicuik on his first time outside the house.

“He was reported missing for 10 days and we believe he was taken in a car and shot sometime before we found him, because the wounds were scabbing over.

“He must have been in agonising pain and is lucky to be alive – he has certainly used up one of his nine lives now.

“Why somebody would do this is beyond me; it is so unnecessary for the poor wee thing.

“Usually a cat would sprint away at the first shot, and that is why we believe he was held or tied down while whoever it was with the gun tried to kill him.”

Willow’s owners, who live in Gilmerton, were last night anxiously awaiting the outcome of his crucial surgery. 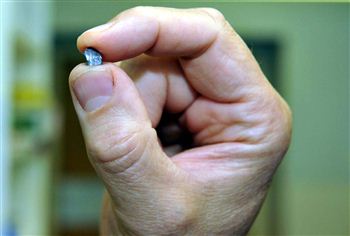 Vets were considering amputating his back leg, such was the severity of the fracture.

Mr Haworth added: “The x-ray is a real eye-opener because it is so shocking, but it also helps us to find all these pellets and pull them out.

“We are hoping to repair the front leg with a plate and the hind let with pins, but it’s a fairly complicated procedure and could result in amputation if things go wrong.

“Hopefully it won’t come to that.

“As an act of cruelty this is one of the worst I have ever encountered. It’s hard to believe that somebody could stand there watching a cat suffer as they fire each shot.

“It makes you wonder what the person who did this is doing in the community.

“I think this person is too dangerous to be in the community with the weapon they used.”

Gun attacks on cats are on this rise according to the Scottish SPCA, who will look after Willow while he recovers from surgery.

They appealed to the public to help them track down the culprit and vowed to report any suspects to police.

Inspector Heather Lawson said: “Willow had never even been beyond the next door neighbour’s garden until last week when he was targeted and shot.

“It’s maybe been his curiosity and own naivety that made him so easy for the people or person to approach him.

“His owners were shocked and tearful when they saw him, but hopefully he’ll make a full recovery and be home soon.”