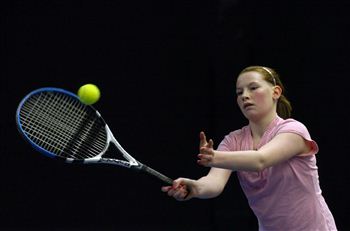 A FUTURE Scots tennis star tipped for success by Tim Henman and Andy Murray’s mum could see her career stall – after the recession left her dad redundant.

Emma Devine’s father Kenneth has lost his job, meaning her parents won’t be able to pay for her expensive training regime any longer.

Kenneth and wife Kathy Devine have been coughing up the £35,000 annual bill for Emma to attend the Justine Henin tennis camp in Belgium where she is trained by Carlos Rodriguez.

But now they face pulling her out of the camp for financial reasons – damaging the 14-year-old’s future in the sport.

Kenneth said: “It is tragic to think that a bright prospect like her might not be able to reach her full potential because there just isn’t the money to fund it. But there’s nothing we can do.

“We tried last year to raise sponsorship for her by contacting major companies and financial institutions in Edinburgh to ask for help – but there was nothing. They seem to prefer sponsoring corporate events.

“Emma has worked hard for her sport for a very long time. Now it looks like that hard work has been for nothing.

“It was difficult for us to fund her last year, but we did it, having been told by Judy Murray, Andy’s mother, that Emma has huge potential. But we can’t financially carry on.”

Kenneth is an accountant at Telford College but has been told he will be made redundant from the middle of next month.

He is worried that it will be hard for him to find another job, never mind foot the bill for Emma’s couching.

He said: “I’m 52 years old, so it’s not going to be terribly easy for me to suddenly find another job.

“So it’s going to be virtually impossible for Emma to carry on.”

The young star is appearing in a showcase display at Wimbledon with Tim Henman, who has been her supporter since he saw her win the HSBC Road to Wimbledon under-14s tournament.

All England Club head coach Dan Bloxham said: “Emma is a real powerhouse from the baseline like Venus or Serena Williams.”

The teenager learned and improved her game at Craiglockhart in Edinburgh before her family were advised to send her to Belgium by Andy Murray’s mum, Judy.

But now it seems that the star will leave the tennis academy in September and return home – her dreams in tatters.