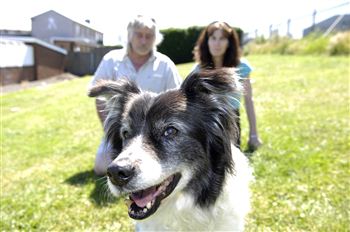 AN elderly dog from Cornwall which was presumed dead after four months missing has shown up over 500 miles from home in Edinburgh.

Lucy, a 17 year-old Collie, was thought to be a stray local dog when she wandered into a garden in Haddington on Saturday morning.

But thanks to a microchip under her fur, staff at a dog kennel in the Scottish capital were able to arrange what turned out to be a tearful reunion for Lucy and her beloved owners Sonya and Billy McKerran yesterday (Tuesday).

Billy, a pub singer who celebrated his 59th birthday yesterday, said: “This is the most terrific birthday present I’ve ever had.”
He and Sonya, 43, a hospital care assistant, said they didn’t think twice about making the epic 20 hour journey of love to take Lucy home, describing her as “part of our family.”

They presumed she had suffered a heart attack and drowned in their garden stream after disappearing on February 6.

The couple had given up hope of finding Lucy until a phone call from the Edinburgh Dog and Cat Home (EDCH).

Sonya said: “Getting the call was unbelievable. I’m still in complete shock. We thought it was a prank call because we were convinced she was dead.

“We’ve got absolutely no idea how she got to Scotland. 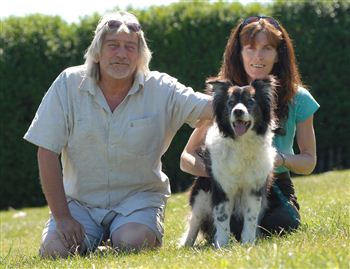 “It had snowed an awful lot in February and the stream she loved to play in had become a gushing torrent. We just thought she had been swept away.

“It’s just amazing to see her again and to see her in such good shape.

“Nobody would steal her to order because she’s not a valuable pedigree, but to us she means the world and is very much part of the family.”

The McKerrans’ reunion with Lucy was made all the more special as it came on Billy’s birthday.

The dog was already well-travelled, having accompanied the couple when they moved to Tenerife for seven years in 1998.

Billy said: “I don’t care that I’ve spent my birthday in the van since 3am and I’ll enjoy the 10 hour ride back, because having Lucy home is something we had given up hope of.

“It proves that the whole concept of micro-chipping the dogs is a marvellous idea and well worth the money.

“We just can’t thank the police and vets enough for getting in touch. It will be lovely to have her back home.”

And Lucy has another reunion to look forward to when she gets home, as the McKerran’s have another dog called Willie, two horses, chickens and three cats.

It cost the couple £35 to have Lucy chipped in 1998 before they moved to Spain, but EDCH manager David Ewing said it’s now even cheaper.

He was so delighted to “finally have some good news” that he waived the usual holding fee for Lucy.

He said: “Cornwall has got to be the furthest away place I’ve ever heard of a dog showing up in Edinburgh from.

“Haddington is proving to be the new Bermuda Triangle, because two years ago there we found a Staffordshire bull terrier which ended up there from London.

“We’re usually at the sharp end of animal problems, so we’re all absolutely delighted to finally have some good news.

“It was lovely to see some happy tears in here for once.

“It costs just £12.50 to have your dog chipped, and Billy and Sonya will no doubt vouch that it is worth every penny.”