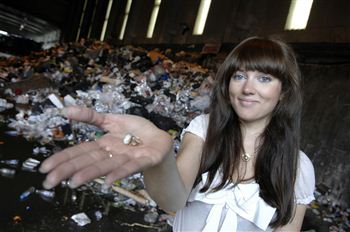 BINMEN found a precious ring with four generations of family history in a 10 tonne mountain of rubbish.

Lucy Morgan, 23, feared she had literally dumped decades of heritage when she accidentally dropped a precious ring into a giant bin.

Binmen told Lucy she had a “one in a million” chance of finding it again, insisting they usually only agree to search rubbish at the request of police investigating a crime.

But when Lucy told them how important the heirloom was to her whole family, they helped her search through ten tonnes of rubbish.

Amazingly, after sifting through the giant mound of filth, one of the binmen spotted the gleaming ring and plucked it from the dirt.
While the ring was probably worth under £100, vintage jewellery lover Lucy, of Edinburgh, said that to her it was priceless.

She said: “I was really touched when my mum told me that my great-granny May Barnes had saved up in 1940 especially to buy the ring.

“It meant so much to be given it on Sunday, so I was in floods of tears when it disappeared into the bin on Monday. I shouldn’t have been wearing it because it was too big, but I loved it so much that I couldn’t resist. 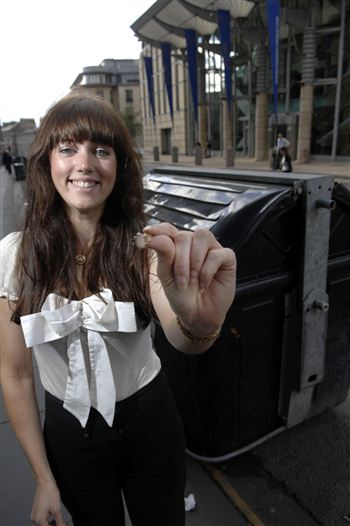 “And just as I was phoning the council to ask them to help me find it, the binmen came and emptied the bin into the truck.

“They said I had a one in a million chance of finding it but I didn’t want to give up hope for my own peace of mind.”

Determined to find the ring, Lucy convinced two binmen, David Gray and Kenny Dailly, to give her a lift to the capital’s Powderhall waste depot.

Kitted out in a full-body overall and gloves, Lucy and the binmen shovelled their way through the mound of muck.

PR account executive Lucy added: “It was pretty gross sifting through all the rubbish, but I thought “I’ve come this far, I might as well do it properly.

“David had gone back to start looking through the leftover rubbish in the truck when he shouted “Is this it?”

“I was screaming with joy and would have hugged him but we were up to our elbows in muck.”

Lucy has now had the ring professionally cleaned and has arranged for it to be resized so she can wear it without fear of losing it again.

Binman Kenny described it as a “miracle”.

He said: “I’ve never done anything like this before. Normally we only do a search like this if there’s been a crime.

“We didn’t hold out much hope as the mountain of rubbish was so huge and the ring was so tiny.

“It did seem like a miracle and Lucy was over the moon.”