SCOTS farmers may feel their recession hit industry is in danger of dying sometimes.

But even they are likely to do a double take at this year’s Royal Highland Show where an exhibition of HEARSES through the ages goes on display.

The macabre show has been organised by Co-operative Funeralcare.

A range of death cabs ranging from glass-walled carriages pulled by a train of black-dressed horses to the latest shining new Mercedes limousines will be on show.

But Andrew Beveridge, 46, regional manager East Scotland for Co-operative Funeralcare, said there was far more to the idea than meets the eye than ghoulish fascination.

He said: “People can be a bit apprehensive at first – but it’s a good stand.

“It’s not all about the bad stuff in life – we’ve people there to talk about recruitment because there is always vacancies crop up, listings of funercare homes, pre-payment plans.

“We expect a lot of interest.” 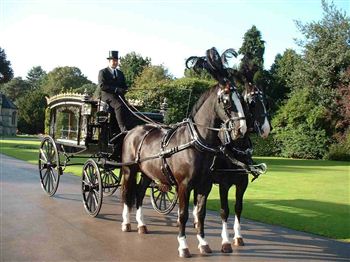 But even he admits it is the vehicles that will be the biggest draw as it isn’t the average kind of motor-show you might expect to see at the Ingliston showground.

He said: “This year we’ve got a horse drawn carriage which always grabs people’s attention.

“I don’t know what it is, but there has been a huge interest and demand for people wanting horse drawn carriages the last three or four years.

“We’ll also have a mini-version of our motorbike-hearse – essentially a bike with a sidecar – that again is very popular, particularly for old bikers.

“A brand new Mercedes and a 1972 Mercedes will both also be there so people can see just how far hearses have come in terms of performance, safety and presentation.

Andrew, who started with the Co-operative at a shop in Lochgelly, Fife, in 1979, before joining the funeral arm in 1992, said they are even expecting people to book their own services while visiting.

He said: “Last year was the first time we tried it and it was really good. There was a lot of interest and we took quite a few pre-payment orders.

“It was mainly farmers and people like that who looked at the costs, realised the prices would go up, and wanted to pick the way they go themselves.”

Royal Highland Show, Show Manager, David Dunsmuir said while the hearses may turn heads, it proved just how diverse the show – which attracts 160,000 people each a year – has become.

He said: “This is what is so special about the Show – all exhibitors go that extra mile to make their stand more interesting and more exciting then the next.

“After all, they have to compete with 4000 animals, cookery demonstrations with famous chefs, live music and spectacular displays – this is not the place for ordinary if you want to stand out.

“The Co-operative Funeralcare are supporters of the show and we are delighted to have them on board.”

The Royal Highland Show starts on Thursday and runs until Sunday.