A penny overdrawn leaves student £48 in the red 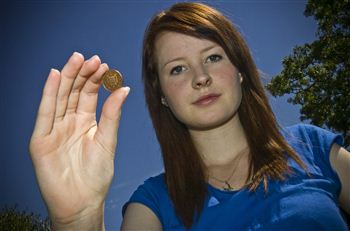 A STUDENT has been hit with a £48 bank charge for slipping into her overdraft – by A PENNY.

Cash-strapped Julia Turner thought she had £5 left in her bank account when she bought a T-shirt but in fact was only £4.99 credit.

Going over her limit by that single penny triggered the astonishing wave of charges.

The Bank of Scotland fined her a £20 administrative fee for going over her limit plus a further £28 “unauthorised overdraft fee.”

The 19-year-old is trying to save money for her fashion course in Glasgow, which she starts in September – and the charges have hit her hard.

She said: “I thought I had a fiver left on my card so I was shocked to receive the letter.

“I would have paid the 1p in cash if I had any idea I’d gone over.

“I thought if I ever went over my overdraft my card would be rejected, so I think it’s a bit sneaky and misleading that they’d let me spend money and then charge a fortune.

“I am putting every penny towards my college fund so it seems a shame to pay such an unnecessary sum.

“I read that being overdrawn only costs the bank about £2.50 to fix.”

Julia’s father, Douglas, is equally angry saying that the banks attitude is disgusting.

He said: “I remember a time when banks actually cared about their customers. This practice might be legal but it’s not right.”

Bank charges have been a hot topic in recent years, with an ongoing argument between eight high street banks and the Office of Fair Trading.

The question of whether or not people can claim back their bank charges has reached the courts and although the OFT won the right to investigate overdraft charges, the House of Lords granted permission for the banks to appeal the decision.

Consumer Focus Scotland said that bank charges should reflect the circumstances of each case.

Their spokesman said: “Bank charges should be proportionate rather than punitive.

“While consumers have responsibilities as well as rights, and banks have to protect the interests of their customers who never go overdrawn, bank charges should reflect the reasonable costs incurred by the banks.

“Banks also need to consider the cost of cases like this one to their reputations and to the level of satisfaction of their customers.”

Yesterday the Bank of Scotland said they are looking Julia’s case.