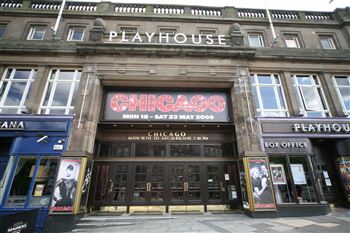 ONE of Scotland’s most famous theatres is up for sale after its owners decided to sell all their venues in the UK.

The Edinburgh Playhouse is owned by a US company, Live Nation, who are looking to offload their 17 properties across the country.

But the future still looks bright for the iconic venue at the top of Leith around 20 theatre operators are interested in the building.

It has been the centre of Edinburgh’s history since it opened as a cinema in 1929, and recently hosted Susan Boyle’s homecoming performance after her stint on Britain’s Got Talent.

Other performances it has hosted include Les Miserables, Chitty Chitty Bang Bang and Bob Dylan.

The building comes with a tumultuous past – since it reopened as a theatre in 1980 it has had a string of owners and has changed hands numerous times.

Although nine jobs were cut earlier this year, the Playhouse is the most profitable venue in Live Nation’s portfolio.

Their chief operating officer for live music, Paul Latham, said that sale still might not go ahead.

“An offer we can’t refuse”

“We might not sell. It’s not a foregone conclusion. It will only be if somebody makes an offer we can’t refuse.”

Mr Latham is no stranger to the theatre as he was the manager from 1986 until the current owners took over in 2006, when he was promoted to his current position.

Live Nation is believed to be turning their focus on live music rather than venues.

The company is already known internationally as successful music promoters, organising the tour for Madonna and U2 amongst others.

Other companies are said to be lining up to place bids for the theatre, including another US firm Key Brand Entertainment, Dutch Stage Entertainment and the Ambassador Theatre Group who run the Kings Theatre.

It is hoped that whoever takes over the venue will appreciate and maintain the history of the 3000-seater venue and continue to add to its current success.

Councillor Steve Cardownie, the city’s arts champion, said: “I would hope whoever takes over would understand the heritage of the theatre and that it is integral to the fabric of the city.

“It attracts big names to Edinburgh through its history and successful relationship with the industry. I hope this sale does not jeopardise that.”

The Playhouse’s general manager, James Howarth, said: “Just now I only know as much as you.”