A FAMILY has gone into hiding after a doting dad walking his dog was gunned down by a masked attacker.

Police are trying to find out why plumber Douglas Downing, 39, was targeted and refused to rule it out as a case of mistaken identity.

Mr Downing (Pictured), of Willowbrae, Edinburgh was still recovering in hospital tonight, and relatives were looking after his house. 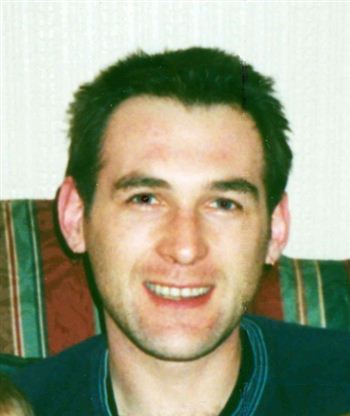 They insisted the shooting was aimed at the wrong man.

One relative, who wouldn’t be named, said: “The family have moved away from here just now, which is understandable considering what happened.

“Dougie is doing okay but he and the family are very shaken up.

“It’s outrageous that someone is running about with a gun in an area like this, with a school so close by.

“It’s definitely a case of mistaken identity. Dougie is a family man and never had any trouble. Everyone is okay, just very shaken up.

“The police have warned us to be careful about what we say, so I can’t say much more than that.”

Bullet holes are still visible in the living room window and blood spatter was cleaned off the outside of the house after forensics completed their investigations.

The hitman lay in wait for the dad of two to return from walking his dog in the early hours of Wednesday morning.

Mr Downing was about to open his front door when somebody opened fire with a shotgun, striking him once in the lower body area and missing with a second round.

The gunman then fled into the dark, leaving Mr Downing in agony in his garden at Paisley Drive, where his partner Carol McEvoy had been inside with their two children – Luis, eight and Cameron, nine.

Shocked neighbours and Carol hurried to the stricken plumber’s aid as police and paramedics were called to the scene.

The plumber was rushed by ambulance to Edinburgh Royal Infirmary where he surgeons operated on wounds, said to be around his waist.

Police are scouring CCTV tapes of surrounding streets in a bid to find a silver car which was spotted screeching away from nearby Meadowfield Drive.

The officer leading the hunt said there was no doubt that Mr Downing was the intended target, but said he had no clear connections with gangs, drugs or other criminal activity and seemed to be nothing but a respectable parent.

Detective Superintendent Alan Jones said: “It was around 12.40am when the victim was walking home from Willowbrae Road with his Collie dog.

“He was in his garden when he heard rustling behind him. A shotgun was then discharged twice injuring the victim.

“He has no links to anything untoward. He is a well-respected family man.

“This has been a purposeful attack – he has been targeted. However we can find no motive for the attack at this stage.

“Something like this has never happened around here in my 27 years of service and I want to reassure local residents that we are doing everything we can.”