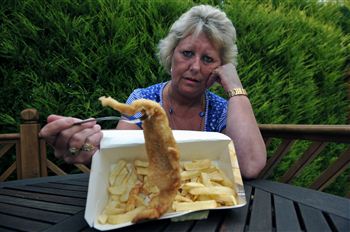 A WOMAN almost died when she suffered a terrifying allergic reaction to fish and chips from the UK’s best chippie.

Anne McDonald, 55, felt her throat closing up after she had tucked into the tasty treat from the world-famous Anstruther Fish Bar.

But luckily she happened across an ambulance parked at the side of the road, who told her she would have died in five minutes without treatment.

Anne and her husband Colin, 52, had decided to take a drive up to the seaside town from their home in Rosyth to mark the longest day of the year with a treat of their favourite dish – a fish and chip supper.

After tucking into the award-winning food, Colin went back inside to get ice creams to finish off their treat.

But as she waited in the car, Anne’s hands began to itch and her glands starting swelling up.

Not wanting to worry her husband, she hid the reaction as they drove back home – taking the more scenic, and remote, coastal road.

She said: “As we drove along the road I could feel my tongue and glands swelling up. It felt as if my throat was closing up, which it almost did.

“I knew I was in trouble. I had been hiding my face from him by looking out the window because I didn’t want him to worry.”

But just as Anne started to panic, she spotted an ambulance sitting at the side of the road.

Telling her husband to stop, she went up to the paramedics – who were treating a patient in the back of the van – and explained what had happened.

They were so worried about the severity of her condition they thought they would have to airlift her to hospital, but luckily she responded to their treatment.

The grandmother said: “When I saw the ambulance I was just so relieved. Colin saw my face and slammed on the breaks.

“He has since said that I looked like I had two heads because my glands were so swollen.”

The paramedics treated Anne on the scene before calling another ambulance to take her to Ninewell’s Hospital in Dundee.

But the chances of her happening on the parked ambulance in the middle of nowhere are slim, and Anne realises how close she came to dying.

She said: “The paramedics told me if I had left it another five minutes then I would have died.

“They hardly ever get called out to that part of Fife so we were lucky to find them. If they’d been driving then we would never have caught up with them.

“It was fate that they were parked where they were and could treat me.

“I am just so grateful to them for saving my life.”

Now the mother of two is waiting to go for testing to find out what would have caused the severe reaction.

In the mean time she has to carry anti-histamines with her all the time in case she suffers another attack.

She said: “We have fish and chips about three or four times a year, but I eat fish on a regular basis.

“The doctors said that the reaction I had would normally be associated with nuts or shellfish.

“I’ve never eaten shellfish before because I didn’t fancy it.

“At the moment I think there might have been some sort of shellfish in the batter, but I won’t know what it was for certain until I go for testing.”

But she’s not blaming the chippie.

She said: “I haven’t spoken to them – it’s not their fault.

“If it does turn out that I’m allergic to shellfish I’ll contact them to tell them just to make sure it doesn’t happen to anyone else.”

The Anstruther Fish Bar is the reigning Seafish Fish and Chip Shop of the Year 2008/2009.

“No way that happened”

Owner of the Anstruther Fish Bar, Alison Smith, said she was mystified by the drama and doubted there was any way that shellfish could have got into the fish batter.

She said: “Absolutely no way that could have happened. We have very strict rules in the kitchen.

“Everything is kept separate and the fish in a fish supper doesn’t go anywhere near shell fish.

“Everything is cooked to order with us as well. With some chip shops the food is pre-cooked and kept in a hot box and maybe then might have come into contact with something. But we don’t do that here.

“The only shellfish we have at the moment is prawns and they are cooked in a completely separate pan.

“I just hope that the woman is okay and it will be interesting to find out what caused the reaction.”