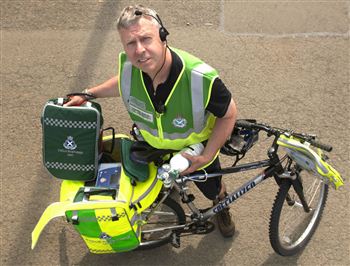 THE AMBULANCE service has launched its new vehicle for a quicker response to emergencies – a push bike.

The bikes will be used by paramedics in Edinburgh and the Lothians to help them get through crowds more easily.

Launched at this year’s Royal Highland show, the cycles will only be used at crowded events like the Fringe Festival to allow the ambulance service to carry out minor treatment.

Two bikes have been kitted out in bright ambulance colours and logos and come full equipped to deal with emergencies.

Head of the ambulance service in the Lothians, John Alexander, said: “We will be seeing these at all sorts of events which involve large numbers of people.

“Marathons and fun runs is an example, and during the Festival we’ll be with them in town to deal with any incidents.

“Also, if there are any significant road works which means ambulances or motorbikes can’t get access, they may be there too.”

They are unlikely to be sent to large sporting events or concerts as more heavy duty vehicles will be on site for them.

They will be pre-planned to attend specific events and weave in and out of the crowds to reach those needing help.

Carrying everything they need in their pannier, they will be able to aid heart attack victims with mini-defibrillators.

And if a patient needs to go to hospital, then a normal ambulance will be close by to take them.

Mr Alexander said: “It’s about getting to people quicker in situations where we otherwise couldn’t.

“Motorcycles are pretty good at getting into awkward places and through large crowds, but even for things like getting onto a cycle track these will be good.

“The Royal Highland show was a good place to launch these bikes because it’s simply wall to wall people.”

But there is one thing the push bikes are missing – a wailing siren and flashing lights.

Mr Alexander added: “I think the only siren will be the paramedics voice.”