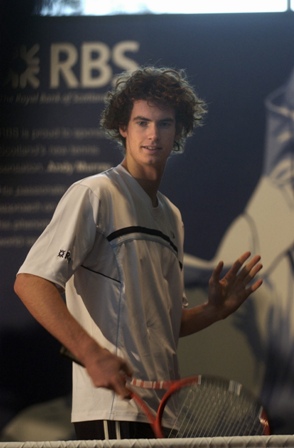 GLOBAL tennis superstar Andy Murray is the latest project of makeover expert Simon Fuller – the man behind the Spice Girls and David Beckham.

Fuller has been credited with transforming the image of the surly Scot from a scruffy, shaggy-haired youth into an athletic phenomenon who could be worth up to £100 million.

Murray, hotly tipped to challenge for this year’s Wimbledon crown, signed with Fuller’s 19 Entertainment firm, which holds the rights to American Idol and stars like Will Young and Geri Halliwell.

Sporting brand giants, including Adidas, are now said to be clamouring for the signature of the Glasgow-born star, who already counts RBS and Fred Perry among his sponsors.

With the ambition of reaching the pinnacle of the sport in the mould of Tiger Woods or David Beckham, Murray settled on the firm after leaving former management company Ace.

He said: “I spoke to all the usual sports management companies and they all said the same thing, the sorts of contracts they could get me and the 10 or 15 per cent they would take from the deal.

“But there was nothing that excited me – all they talked was tennis.

“I suppose I wanted something more bespoke, something that reflected who I am – Simon Fuller was completely different and overflowing with ideas.

“He is already fantastically wealthy, so it was obvious that he really isn’t bothered about 5 per cent of a racket deal.”

Once accused by Wimbledon legend Pat Cash for having a “boring, monotone voice” and that he was “never going to be eye candy”, the 22-year-old is now a long way from the bedraggled teenager who won the BBC Scotland Sports Personality award in 2005.

Murray’s updated image now sees him posting on Twitter, boasting about his practical jokes and love of computer games.

Coupled with his meteoric rise in the world rankings, the in-form star has seen his international profile boosted with a column in newspaper USA today and plenty of coverage in heavyweight newspapers such as the New York and Los Angeles Times.

And experts believe that his transformation could earn him up to £80 million in sponsorship, with a further £20 million in the bag for when he retires.

PR experts, including Mark Borkowski, credit Murray and his family with consistently taking good advice for the good of his future.

“We forget how young he is, but he’s taken some very good advice.”