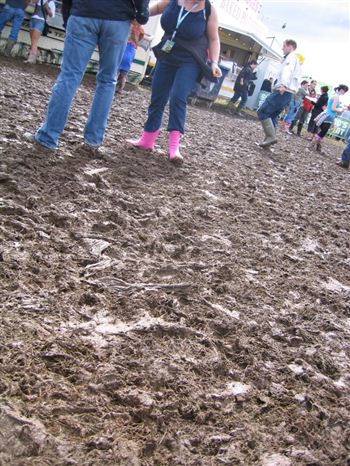 REVELLERS should pack their wellies for T in the Park this year as forecasters are predicting a muddy washout.

Torrential downpours and thunderstorms next week are set to leave the Balado festival site soaked, with the Met Office predicting localised flooding.

But with 10 days to go, organisers insist the heavy rain won’t put the festival in jeopardy.

And local garden centres are stocking up on Wellington boots and waterproofs to cash in on the mudbath.

In 2007 many retailers ran out of wellies on the first day of Scotland’s biggest music event, leaving music lovers with no option but to trudge around the Kinross site up to their knees in mud.
In light of this year’s grim weather prediction, Elliot Johnston, Dobbies Garden Centres’ manager, says they’ve learned their lesson.

He said: “Last year it was awful weather in the week before T in the Park and our sales of wellies were up 62 per-cent.

“But some places did run out, so we’re stocking up big time this year.

“The Kinross store is right on the edge of the festival boundary, so we’ve got an order in for extras there, as well as at the Stirling and Dunfermline stores which are on the main road routes north to the festival.

“Funnily enough, disposable barbecues are the next-best seller to wellies, despite the expectation for rain.”

This year’s festival, between 10 and 12 July, is headlined by The Killers, Kings of Leon and reformed Britpop heroes Blur.

After getting it wrong last year – predicting rain when it turned out to be a scorcher – forecasters now admit “anything could happen.”

A Met Office spokesperson said: “There is a clear expectation of scattered thunderstorms this week in that area, with some becoming severe with hail and torrential downpours causing localised flooding.

“But for the week before the festival it’s a lot more unsettled and naturally harder to call – anything could happen.

“On the upside, it does appear there will be dry spells and the temperatures near or above normal.”

He said: “Our office isn’t too far from the site, so we’ve always got a good idea what it will be like.

“I’m not worried about the bad weather forecast, because they got it completely wrong last year.

“There was rain in the run-up and they said it would be a mudbath, but the ground held out and I actually got a bit sunburnt, the weather was that good.

“However it does sound quite bad this year and the camping area is particularly prone to flooding, so I’ll maybe pack my wellies just in case.

“Everyone in Scotland knows anything can happen when it comes to weather.”

A T in the Park spokesperson said: “As everyone knows, it’s impossible to completely predict the weather at an outdoor event in Scotland, and our site team and emergency services ensure that the festival is well prepared for all eventualities through a wide range of measures.

For audiences we provide indoor areas plus goods such as sunscreen and rain ponchos if required, plus we issue common sense advice to come prepared for all weathers every year, no matter what the weatherman says.”